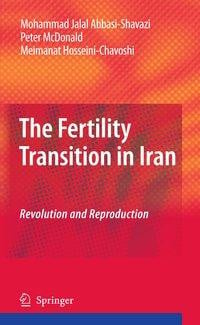 The Fertility Transition in Iran

The Fertility Transition in Iran
Revolution and Reproduction

Confounding all conventional wisdom, the fertility rate in the Islamic Republic of Iran fell from around 7.0 births per woman in the early 1980s to 1.9 births per woman in 2006. That this, the largest and fastest fall in fertility ever recorded, should have occurred in one of the world's few Islamic Republics demands explanation. This book, based upon a decade of research is the first to attempt such an explanation. The book documents the progress of the fertility decline and displays its association with social and economic characteristics. It addresses an explanation of the phenomenal fall of fertility in this Islamic context by considering the relevance of standard theories of fertility transition. The book is rich in data as well as the application of different demographic methods to interpret the data. All the available national demographic data are used in addition to two major surveys conducted by the authors. Demographic description is preceded by a socio-political history of Iran in recent decades, providing a context for the demographic changes. The authors conclude with their views on the importance of specific socio-economic and political changes to the demographic transition. Their concluding arguments suggest continued low fertility in Iran.The book is recommended to not only demographers, social scientists, and gender specialists, but also to policy makers and those who are interested in social and demographic changes in Iran and other Islamic countries in the Middle East. It is also a useful reference for demography students and researchers who are interested in applying fertility theories in designing surveys and analysing data. von Abbasi-Shavazi, Mohammad Jalal und McDonald, Peter und Hosseini-Chavoshi, Meimanat