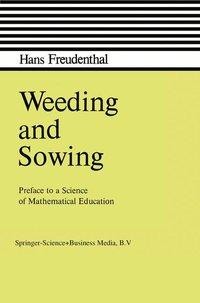 Weeding and Sowing
Preface to a Science of Mathematical Education

A title that sounds like poetry, and a subtitle that seems to contradict the title! But the subtitle is right, and originally it was just the title. A strange subtitle, isn't it? Preface to a Science of Mathematical Education. All sciences - in their prenatal stage - have known this kind of literature: only the term used was not 'Preface', but, for instance, 'Prolegomena', which * means the same though it sounds less provisional. In fact such works were thicker than the present one, by up to ten times. There is much more that can be said about a science before it comes into being than after; with the first results comes modesty. This is the preface to a book that will never be written: not by me, nor by anybody else. Once a science of mathematical education exists, it will get the preface it deserves. Nevertheless this preface - or what for honesty's sake I have labelled so - must fulfil a function: the function of accelerating the birth of a science of mathematical education, which is seriously impeded by the unfounded view that such already exists. Against this view I have to argue: it rests on a wrong estimation - both over and under estimation at the same time - of what is to be considered as science.