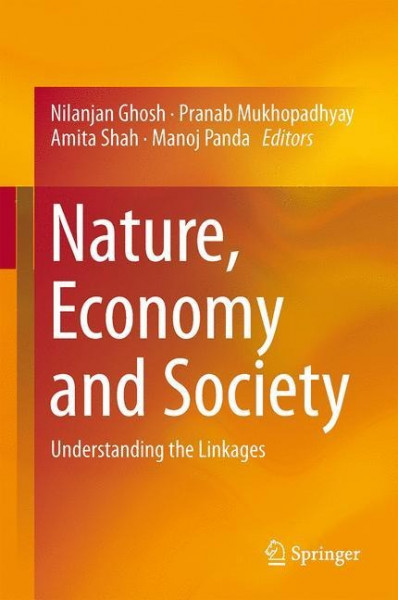 This book presents an enquiry into the interface between nature, economy and society, which is still in its early stages, notwithstanding the commendable progress and advances made in the field of environmental and natural resource economics within the ever-expanding boundaries of economics as a discipline. It further delineates the evolution of an inter-disciplinary framework for analyzing the status, the future goals, mechanisms and policy instruments that can help move towards a more ecologically sustainable, economically beneficial and socially just future.A pre-requisite for preparing a comprehensive and coherent framework involves unfolding the multiple layers of interconnectedness between the three systems nature, economy and society, each of which has its own internal consistencies as well as externalities. Against this backdrop, the book presents scholarly contributions that focus on four broadly defined building blocks, namely: i) accounting for ecosystems services for life and human well-being; ii) impacts of economic growth on ecosystems; iii) social norms, equity, and governance; and iv) alternative approaches to green and socio-economic systems.The analyses, presented by some of the most eminent national and international scholars, address the major environmental challenges that nations around the world face today and consider which specific policy directions at the international and national level are needed. In particular, the choices India and South Asia now face, as development and environment both need to be addressed adequately, touch on many of these challenges. von Ghosh, Nilanjan und Mukhopadhyay, Pranab und Shah, Amita und Panda, Manoj

Nilanjan Ghosh is a senior fellow (Professor), Observer Research Foundation, Kolkata Chapter. He is also a Senior Advisor - Environmental Economics, World Wide Fund (WWF) for Nature, New Delhi, India. Prior to joining ORF, he served as the Chief Economist at the Multi Commodity Exchange of India Limited and a senior research professional at The Energy and Resources Institute (TERI), New Delhi. He is also a visiting fellow at Department of Political Science, School of Social Sciences, Växjö University (now Linnaeus University), Växjö, Sweden. A natural resource economist and econometrician by training, he obtained his doctorate degree from the Indian Institute of Management, Calcutta. He has been working in the domains of ecological economics, water resources, and commodity derivative markets, conducting his research by combining frameworks of neoclassical economics and institutions. His publications include 6 books, 30-odd peer-reviewed research papers in top international journals (like Water Policy, Conservation and Society, Journal of Industrial Ecology, Journal of Index Investing, Economic & Political Weekly). Dr. Ghosh was also the Vice President of the Indian Society for Ecological Economics (INSEE) during 2012-14, and delivered the presidential address at the seventh INSEE biennial conference in 2013.Pranab Mukhopadhyay is a professor and former head of the department of economics at the Goa University, India. He worked as an environmental economist with the South Asian Network for Development & Environmental Economics (SANDEE), based at the International Union for Conservation of Nature, (IUCN, Nepal), Kathmandu in 2006-2008. He is a SANDEE Fellow and continues to be actively involved with the Network's activities. He has published books and also in national and international journals such as Ecology and Society, Economic & Political Weekly, Environment & Development Economics, and some edited volumes. His work in environmental economics focuses on common property resources and institutional economics. He was the Secretary of the Indian Society for Ecological Economics (INSEE) during 2012-14.Amita Shah is a professor and the former Director at the Gujarat Institute of Development Research. Her major areas of research interest include natural resource development with special focus on dry-land agriculture and forestry, environmental impact assessment, gender and environment, the agriculture-industry interface, small scale and rural industries, diffusion of technologies, and employment-livelihood issues. More recently, she has been involved in a number of studies pertaining to participatory watershed development, protected area management, economic valuation of bio-diversity, and chronic poverty in remote rural areas, migration and status of women in agriculture. She has published nearly 100 research papers in professional journals and books and participated in a number of academic seminars. She has co-authored a book and jointly edited three books pertaining to agriculture, sustainable development and gender. She has been invited as a visiting fellow/scholar to academic institutions in the United Kingdom, China, France, the Netherlands and Canada. She was the President of the Indian Society for Ecological Economics in 2012-14. Manoj Panda holds a PhD in economics from the Indian Statistical Institute. He is currently Director of the Institute of Economic Growth, Delhi. He has served as the Director of the Centre for Economic and Social Studies (CESS), Hyderabad (2008-2012), as a Professor and an Associate Professor at the Indira Gandhi Institute of Development Research (IGIDR), Mumbai (1992-2012) and as a senior economist at the National Council of Applied Economic Research, New Delhi (1982-92). He spent a year at Yale University, USA on a post-doctoral fellowship (1996-97). His research areas span monitoring and analysis of macroeconomic trends and prospects, evaluation of alternative trade and fiscal policy options from the point of view of growth and distribution, development and application of computable general equilibrium (CGE) models, construction of Social Accounting Matrices (SAM), measurement and policy issues in poverty and human development and interaction of carbon emission with economic growth and its pattern. He has undertaken short-term assignments for several international organizations including the World Bank, ADB, UNDP, FAO, UN-ESCAP, IFPRI, MacArthur Foundation and Carnegie Endowment. He has published extensively in journals and edited books.