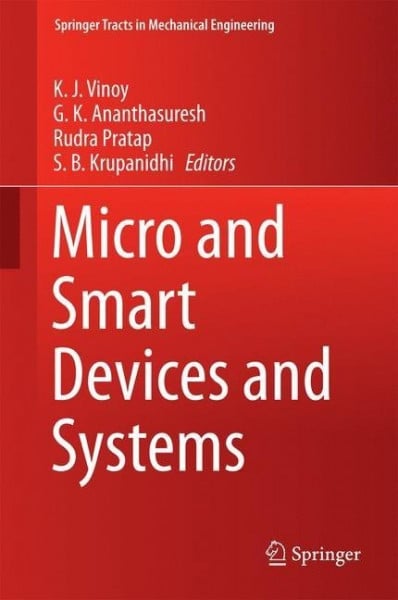 Micro and Smart Devices and Systems

Micro and Smart Devices and Systems

The book presents cutting-edge research in the emerging fields of micro, nano and smart devices and systems from experts working in these fields over the last decade. Most of the contributors have built devices or systems or developed processes or algorithms in these areas. The book is a unique collection of chapters from different areas with a common theme and is immensely useful to academic researchers and practitioners in the industry who work in this field. von Vinoy, K. J. und Ananthasuresh, G. K. und Pratap, Rudrac und Krupanidhi, S. B.

Prof. K.J. Vinoy is working as Associate Professor in Department of Electrical Communication Engineering, Indian Institute of Science, Bangalore, India. He completed his PhD from Pennsylvania State University, USA in 2002. His research interests are on computational and experimental aspects of microwave engineering and microsystems. Dr. Vinoy is an elected Fellow of Indian National Academy of Engineering. He is currently in the Editorial Board of several journals. Dr. Vinoy has published 55 papers in journals, 110 papers in Conference Proceedings and four books.Prof. G.K. Ananthasuresh is a Professor in Mechanical Engineering Department, Indian Institute of Science, India. He earned PhD in Mechanical Engineering from University of Michigan in 1994. Prof. Ananthasuresh also completed post-doctoral research from Microsystems Technology Laboratories, Massachusetts Institute of Technology, Cambridge, MA, USA. He received Shanti Swarup Bhatnagar Prize 2010 in Engineering Sciences, Swarnajayanti Fellowship in 2006 and National Science Foundation Early CAREER award. He is also a fellow of the Indian National Academy of Engineering. His research areas include Compliant mechanisms, Topology optimization, Micro-Electro-Mechanical systems, Protein design, Biomechanics of cells and tissues, Inverse problems and kinematics of mechanisms. Dr. Ananthasuresh is editorial board member of more than 10 international and national journals; he has been awarded four patents while four are pending; gave more than 50 invited talks; published more than 76 papers in journals and 120 papers in Conference Proceedings; four books and 12 book chapters.Prof. Rudra Pratap is currently working as Professor and Chairperson of Centre for Nano-Science and Engineering, in Department of Mechanical Engineering, Indian Institute of Science, India. He completed his PhD from Cornell University, USA in 1993. He is an elected Fellow of Indian National Academy of Engineering. His research interests include micro & nano electro-mechanical Systems (MEMS/NEMS), nonlinear dynamics & applied dynamical systems and structural vibration & vibroacoustic. Dr. Pratap is Associate Editor of International Journal of Green Nanotechnology. He has been awarded 4 patents; published 57 papers in journals and 68 papers in Conference Proceedings and published 3 books.Prof. S.B. Krupanidhi is working as Professor and Chairman of Materials Research Centre, Indian Institute of Science, Bangalore, India. Following his PhD from Delhi University in Solid State Physics in 1981, Prof. Krupanidhi held a post doctoral position at Queen's University, Canada till 1984. He then worked as Principal Scientist at Motorola in Albuquerque till 1988 prior to joining the Pennsylvania State University as a Professor. Since 1995 he has been a member of the faculty at MRC. Prof. Krupanidhi has been selected for J.C. Bose National fellowship for the year 2010, constituted by Department of Science and Technology. He is a fellow of Indian Academy of Science, Indian National Science Academy, Indian National Academy of Engineers and Asia Pacific Academy of Materials. He has authored 6 books, 6 book chapters and edited 8 books. He holds 3 international patents. He is in the editorial board of various international journals and published about 500 papers in international scientific journals of high repute. He holds key positions in various international scientific bodies.