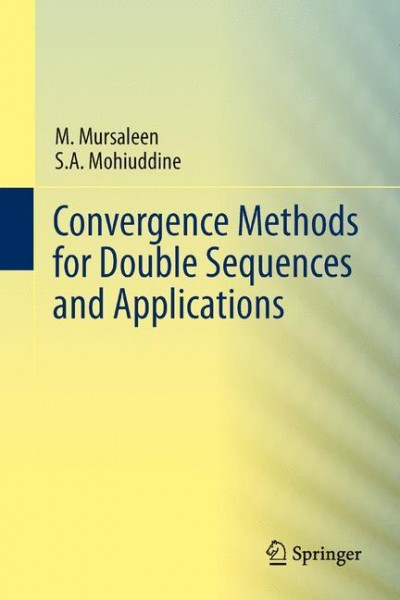 This book exclusively deals with the study of almost convergence and statistical convergence of double sequences. The notion of "almost convergence" is perhaps the most useful notion in order to obtain a weak limit of a bounded non-convergent sequence. There is another notion of convergence known as the "statistical convergence", introduced by H. Fast, which is an extension of the usual concept of sequential limits. This concept arises as an example of "convergence in density" which is also studied as a summability method. Even unbounded sequences can be dealt with by using this method. The book also discusses the applications of these non-matrix methods in approximation theory. Written in a self-contained style, the book discusses in detail the methods of almost convergence and statistical convergence for double sequences along with applications and suitable examples. The last chapter is devoted to the study convergence of double series and describes various convergence tests analogous to those of single sequences. In addition to applications in approximation theory, the results are expected to find application in many other areas of pure and applied mathematics such as mathematical analysis, probability, fixed point theory and statistics. von Mursaleen, Mohammad und Mohiuddine, S. A.

M. MURSALEEN is a full professor of Mathematics at Aligarh Muslim University, Aligarh. Earlier, he worked as a full professor of Mathematics at King Abdulaziz University, Jeddah, Saudi Arabia, during 2004-2006. An active researcher, Prof. Mursaleen has authored two books and five book chapters, in addition to his contributions to 190 research papers to various international journals such as Proc. Amer. Math. Soc., Quarterly J. Math. (Oxford), Studia Math., Information Sciences, and Chaos, Solitons & Fractals to name a few. Prof. Mursaleen is reviewer for Mathematical Reviews (USA) since 1982, as well as referee of about 100 scientific journals (most of them are SCI/SCI expended journals). He has also guided 12 PhD students so far. He has visited about 16 countries including USA & UK and delivered about 32 talks, He has also participated in joint research work with faculty members of the host institutions. Prof. Mursaleen is member of the editorial board of various scientific journals and has served as member of various international scientific bodies and organizing committees that include International Council of Scientists "Global World Communicator Education and Science". He has worked on a number of joint projects of international collaboration. His main research interests are Sequence Spaces, Summability Theory, Approximation Theory, Functional Equations, Measures of Non-compactness and Fixed-Point Theory.S.A. MOHIUDDINE is associate professor of Mathematics at King Abdulaziz University, Jeddah, Saudi Arabia. He received his PhD degree from Aligarh Muslim University, Aligarh, India. He was awarded postdoctoral fellowship by National Board for Higher Mathematics (NBHM), Department of Atomic Energy, Government of India. His main research interests are field of sequences spaces, measures of noncompactness, approximation theory, summability theory and fixed point theory. Prof. Mohiuddine has published over 70 research papers in several international journals and 2 book chapters. He is reviewer for Mathematical Reviews (USA) and referee for many scientific journals. He is also member of the editorial board of some mathematical journals.