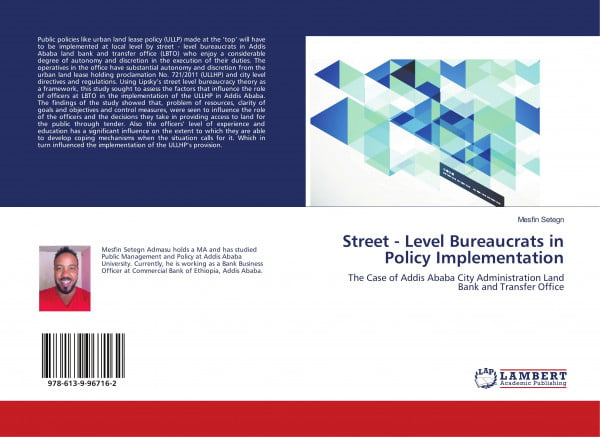 Public policies like urban land lease policy (ULLP) made at the 'top' will have to be implemented at local level by street - level bureaucrats in Addis Ababa land bank and transfer office (LBTO) who enjoy a considerable degree of autonomy and discretion in the execution of their duties. The operatives in the office have substantial autonomy and discretion from the urban land lease holding proclamation No. 721/2011 (ULLHP) and city level directives and regulations. Using Lipsky's street level bureaucracy theory as a framework, this study sought to assess the factors that influence the role of officers at LBTO in the implementation of the ULLHP in Addis Ababa. The findings of the study showed that, problem of resources, clarity of goals and objectives and control measures, were seen to influence the role of the officers and the decisions they take in providing access to land for the public through tender. Also the officers' level of experience and education has a significant influence on the extent to which they are able to develop coping mechanisms when the situation calls for it. Which in turn influenced the implementation of the ULLHP's provision. von Setegn, Mesfin

Mesfin Setegn Admasu holds a MA and has studied Public Management and Policy at Addis Ababa University. Currently, he is working as a Bank Business Officer at Commercial Bank of Ethiopia, Addis Ababa.