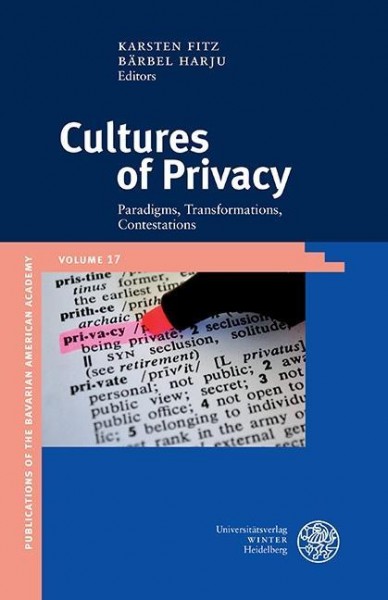 America has been hailed as the land of personal freedom, where the rights of the single citizen reign over the demands and expectations of the masses. Yet freedom of choice and the premium placed on private property also necessitated a counter force, a submission to authority, and pre-established patterns of behavior. And it led to a highly ambivalent notion of privacy, as an individual right situated between apparent opposites - private freedom and public order, liberalism and authoritarianism, (individual) autonomy and (communal) collectivity.'Cultures of Privacy - Paradigms, Transformations, Contestations' addresses the nation's struggles to harmonize these opposites, to reconcile the private and the public, both in a historical and comparative, transnational perspective. Individual contributions take issue with the staggering transformations of the public/private dichotomy, with the alleged erosion of privacy in the political arena, the "right to be let alone" in US legal culture, and the ambiguous hyperemphasis on the private in the media and in popular and literary culture (as in confessional blogs, social networks, and memoirs). von Fitz, Karsten und Harju, Bärbel