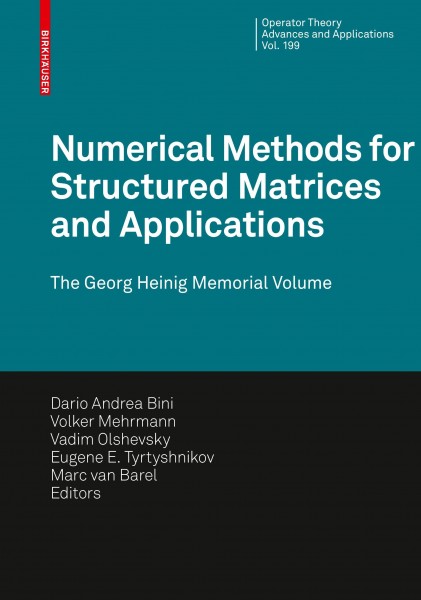 Georg Heing, a charming, erudite man, and a ?rst rate mathematician died un- pectedly of a heart attack on May 10, 2005. Georg is survived by his wife Gerti, his daughter Susanne, and his son Peter. We have lost one the leading experts in the ?eld of structured matrices, a wonderful colleague, and a terri?c friend. GeorgHeinig'sresults,approaches,andhisscienti?ctastein?uencedourc- munity of researchers working on structured matrices. In fact, the community's focus grew to re?ect his interdisciplinary vision ranging from applications (e.g., in systems and control theory and signal processing) through fundamental mat- matics(structuredmatrices,periodicJacobi,Toeplitz,andWiener-Hopfoperators, classesofsingularintegraloperators,resultantsandBezoutiansforoperator-valued polynomials and continual analogs thereof) to numerical analysis and fast al- rithms. The broad spectrum of Georg Heinig's interests are represented in this collection. Georg served as an Associate Editor of two top journals: Integral Equations andOperatorTheoryand LinearAlgebraand Its Applications. This volumestarts with two eulogies published earlier by IEOT and LAA. The ?rst one, published in IEOT is by Albrecht Bot ¿ tcher, Israel Gohberg (who was Georg's advisor during his Ph.D. studies), and Bernd Silbermann. The second one, published in LAA is by Karla Rost who collaborated with Georg during last three decades until day of his death. They have produced together more than 30 papers and a monograph. von Bini, Dario Andrea und Mehrmann, Volker und Olshevsky, Vadim und Tyrtsyhnikov, Eugene und Barel, Marc va