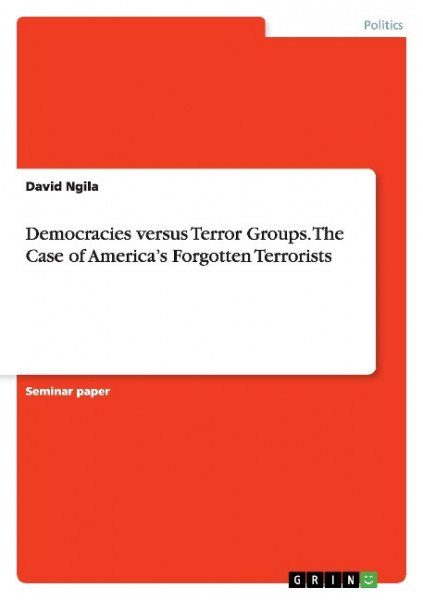 Democracies versus Terror Groups. The Case of America's Forgotten Terrorists

Democracies versus Terror Groups. The Case of America's Forgotten Terrorists

Seminar paper from the year 2015 in the subject Politics - International Politics - Region: USA, , language: English, abstract: Terrorist groups have been prevalent in democracies across continents, and the basis of their proliferation has been associated with the dynamics existent in democratic institutions. As Chenoweth (2006) articulates, the fact that democracies offer non-violent approaches to conflict resolution provides the avenue for the rise of terrorist organizations. Additionally, civil and political liberties correlate positively with terrorism as the democratic permissiveness allows for terrorist groups to act against their own or foreign governments. In essence, terrorist groups find that democracies provide the right environment or have the opportunity structure for them to thrive.Regardless of the reason for the formation of any terrorist group, terrorist organizations in any democracy pull back on the development and progress in these democracies and infringe on human rights. The United States is considered as the very definition of democracy, and it has had to deal with the ripples caused by foreign or local terrorist organizations. In the country's history lies the dark past of the Ku Klux Klan, regarded as one of the oldest terrorist organization in the country.The report that follows analyzes the profile of the Ku Klux Klan over the years, with a focus on how terrorist organizations grow in democracies and how governments intervene for the sake of democracy. von Ngila, David