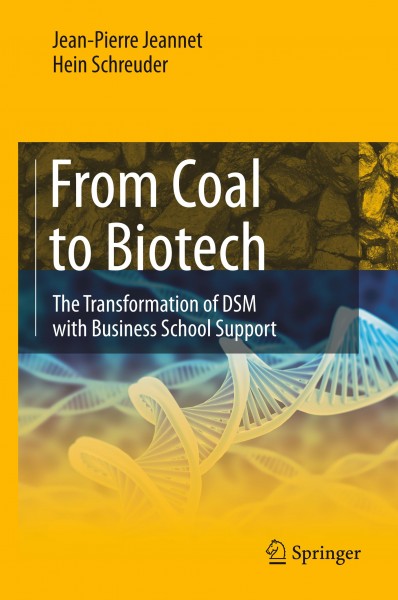 From Coal to Biotech

Professor Jean-Pierre Jeannet served on the faculty of Babson College (1974 - 2013) where he last held the F.W. Olin Distinguished Professorship, while serving simultaneously on a joint-appointment at IMD Institute (1981 - 2010). His teaching and research focused on marketing, strategy and globalization. At IMD, he was responsible for the DSM IMPACT seminars leading to many further strategy engagements. At Babson, he headed the seminars for DSM in the marketing area and the leadership and strategy seminars. He is a native of Switzerland and earned his MBA and PhD from the University of Massachusetts at Amherst. He holds the rank of Professor Emeritus from both Babson College and IMD. He is the author of Managing with a Global Mindset as well as co-author of  Global Marketing Strategies and Global Account Management. He currently is the Qiushi Chair at Zhejiang University School of Management in China. He shares his residency between Lausanne, Switzerland and Vienna, Austria.Hein Schreuder was Executive Vice President Corporate Strategy & Acquisitions at Royal DSM N.V. until 2012. He has a MBA from the Erasmus University Rotterdam and a Ph.D. from the Free University of Amsterdam. He joined DSM in 1991 in the management team of the Polymers Division. In 1994 he became Deputy Director of Corporate Planning and Development DSM. In 1996 he assumed full executive responsibility for all DSM's corporate strategic and M&A activities. In his early career, he has been Director of a research institute in the field of economics and business, Professor of Strategy and Organization at the University of Maastricht and Fellow of the European Institute for Advanced Studies in Management at Brussels, Belgium. He was a Visiting Professor at the University of Washington, Harvard Business School and the China Europe International Business School in Shanghai. He has written numerous articles and seven books, including (with Sytse Douma) Economic Approaches to Organizations (5th edition, 2012), which has been published in six languages (Chinese, English, Japanese, Korean, Portuguese and Spanish). Currently, he is a Board Advisor, Executive Coach and Non-Executive Director on several boards. He is also Board member and Adjunct Professor at Vlerick Business School in Belgium. He lives in Maastricht, is married and has four children.