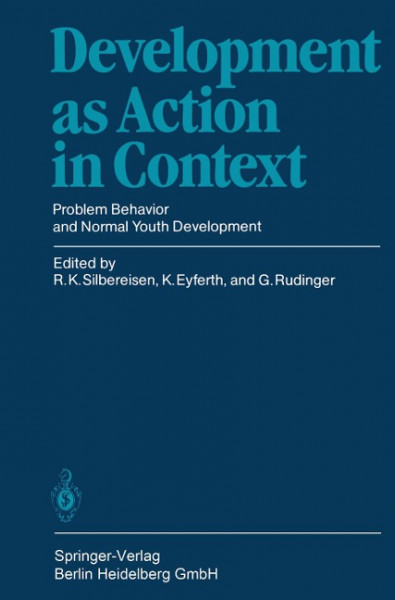 Development as Action in Context

Most contributions to this volume originated as papers given at an inter­ national conference on Integrative Perspectives on Youth Development held in Berlin (West) in May, 1983. This conference was part of a 6-year longi­ tudinal research program on the causes of substance use among adolescents in Berlin, which is now in its fourth year. The conference title deliberately did not refer to substance use. However, its relevance to an explanation of drug-related problem behavior was made evident to everyone invited to the conference. The search for integrative perspectives in youth development originated in a dilemma that became obvious during the planning of intensive research on concomitants of substance use. In the methodology for research on youth development, there were two lines of thought that seemed completely unre­ lated to each other: One line of thought was oriented toward the person, leaving situational aspects aside, while the other concentrated on ecological or situational determinants and thus neglected the aspects of development and internal processes. The integration of both these directions seemed to be an unusually promising approach for any project that aimed to understand changes in the individual within a rapidly changing urban setting. The best way to come closer to a resolution of that dilemma seemed to be an intensive exchange between the American and European scientific communities on this issue. von Silbereisen, Rainer und Eyferth, Klaus und Rudinger, Georg