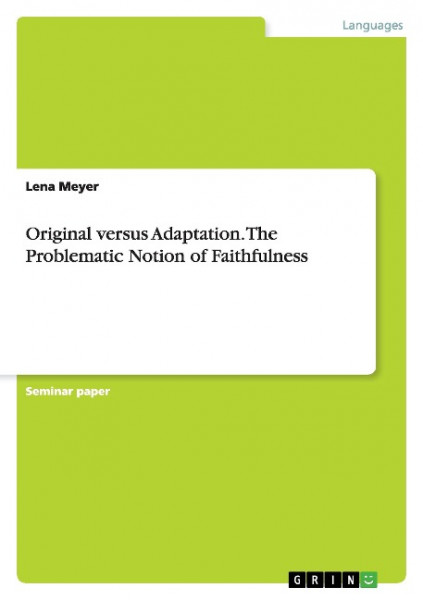 Original versus Adaptation. The Problematic Notion of Faithfulness

Original versus Adaptation. The Problematic Notion of Faithfulness

Seminar paper from the year 2014 in the subject English - Miscellaneous, grade: 1,3, University of Cologne, language: English, abstract: The reuse of ideas already in existence - be it in parts, as a whole or as a basis for further development - seems to be a creative practice as old as art itself and is most commonly referred to as 'adaptation'. Yet, the exact properties denoted by this term often remain unclear, resulting in either an almost extreme narrowing or broadening of its qualities and leading to an ongoing discussion of its social and cultural value, authority and purpose.However, since the emergence of cinema, one facet of adaptation theory appears to dominate the topic's recent discussion in both popular and academic writing, namely movie adaptations based on literary originals, offering rather striking examples for the practice's challenges and problems, but also illustrating the numerous possibilities it provides.This paper primarily deals with a special aspect of these discussions: the faithfulness of movie adaptations. Seemingly, the degree of loyalty which cinematic adaptations display towards their literary originals functions as the bone of contention in many, presumably even most of the often heated debates centered around this part of a generally broad discourse - as, interestingly, non-scholarly audiences and academic writers alike tend to judge an adaptation's quality on the basis of its, however generated, faithfulness to an original.