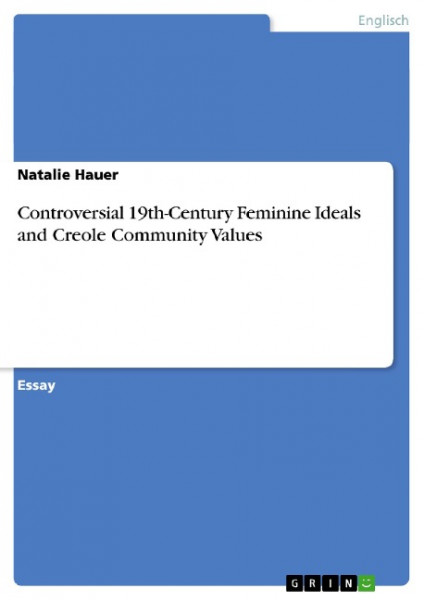 Essay aus dem Jahr 2011 im Fachbereich Anglistik - Kultur und Landeskunde, Johannes Gutenberg-Universität Mainz, Sprache: Deutsch, Abstract: From the mid-19th century on, the hitherto largely male dominated US-American society felt compelled to face the first wave of feminism, which united women in their fight for equality. Although women had contributed a great deal to the colonization of the USA, they had not been granted the civil right to vote in national and local elections until the passage of the 19th amendment to the Constitution in 1920, which stated that ¿the right of citizens of the United States to vote shall not be denied or abridged by the United States or by any State on account of sex¿ (National Archives and Records Administration). At a time when the US saw themselves confronted with major social and economic changes, among others caused by the industrialization, the influence of science (e.g. Dar-win¿s revolutionary theory of evolution, transportation by means of the first continental railroad completed in 1869) gender specific role models were affected, too. As these de-velopments caused feelings of insecurity in many people, much importance was attached to the own home, which was seen as a haven of security amidst social and economic turmoil (Shanley 3). The making of a stereotype like that of the ¿Victorian Lady¿ or the ¿Southern Lady¿ can be seen as an attempt to create a solid authority in a time of radical changes. The Louisiana Purchase in 1803 posed a challenge to the Protestant Americans as the life-style of the Catholic Creoles differed greatly from the ones in the rest of the US. The be-liefs ¿ comprising, amongst others, religious ones - and values of the Creole community were met with rejection and were sometimes described as un-American. von Hauer, Natalie