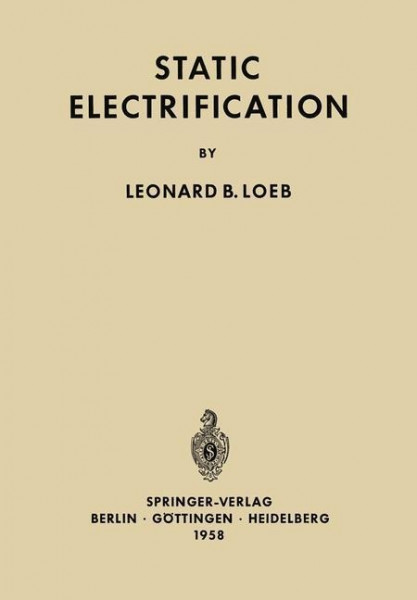 In our preoccupation with thc dramatic developments in the numerous fields of modern physics with their beautiful instrumentation and exciting revelations, we tend to forget our profound ignorance of some of the longest known pheno­ mena of physics. Among these were, until the middle nineteen hundred and thir­ ties, ferromagnetism, friction, lightning stroke, the common electric spark, and static electrification. The first two have now been pretty weIl clarified and the und erst an ding of both of these phenomena have contributed greatly to our under­ standing of the structure of matter and surface physics. The lightning stroke and common spark are weH on their way to clarification. Strangely despite the ever expanding importance of static electrification in industry affecting as it does, a wide diversity of processes either as a useful tool or adversely and extending even to the realms of meteorology, this field has awakened little curiosity and stimulated little investigation in recent years except in so far as the immediate industrial problems it invoked required an immediate and often make-shift remedy. Trained in his early years as a chemist, and brought into contact with some aspects of colloidal chemistry involving electrokinetic potentials, cataphoresis, and spray electrification, thc author had his curiosity aroused by a number of these strange phenomena. Entering physics as a life career coincident with the development of the earl)' studies in atomic structure, in part through his teacher, R. A. von Loeb, L. B.