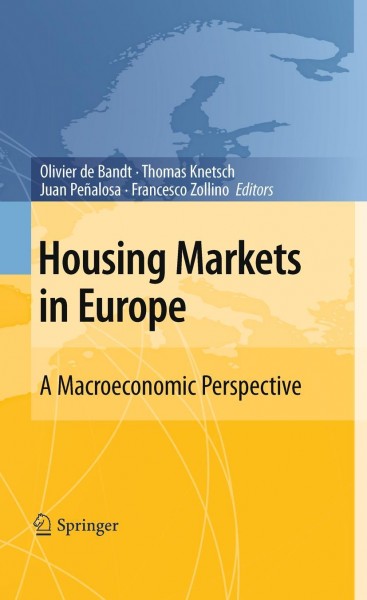 During the recession in the years 2008-2009, the most severe for mature economies in the post-war period, housing markets were often mentioned as having a special responsibility. The objective of this book is to shed light on the cyclical behaviour of the housing markets, its fundamental determinants in terms of supply and demand characteristics, and its relationship with the overall business cycle. The co-movements of house prices across countries are also considered, as well as the channel of transmission of house price changes to the rest of the economy. Particular attention is paid to the effects on private consumption, through possible wealth effects. The book is a compilation of original papers produced by economists and researchers from the four main national central banks in the euro area, also with the participation of leading academics. von Bandt, Olivier de und Knetsch, Thomas und Peñalosa, Juan und Zollino, Francesco

Olivier de Bandt holds a PhD in economics from the University of Chicago. He is currently Director of Business Conditions and Macroeconomic Forecasting at the Bank of France. He is also associate professor of economics at the University of Paris Ouest and co-editor with Heinz Herrmann and Giuseppe Parigi of "Convergence or Divergence in Europe?" published by Springer Verlag. Thomas Knetsch holds a PhD in economics from the Freie Universität Berlin.He currently heads the structural issues unit of the Macroeconomic Analysis and Projections Division in the Economics Department of the Deutsche Bundesbank. He has published a number of research papers in empirical macroeconomics, applied time-series analysis and economic forecasting. Juan Peñalosa has developed his career as an economist in the Economics, Statistics and Research Directorate General of the Bank of Spain, having been member of different European Committees both in Brussels and in Frankfurt linked to monetary, financial and macroeconomic issues. At present he is head of the Forecasting and Conjunctural Analysis Division in the Bank of Spain. Francesco Zollino received a PhD in economics from the University of Southampton (UK) and was visiting fellow at Princeton University (USA). He is currently Deputy Head of the Economic Outlook Division in the Research and International Relations Area of the Bank of Italy.