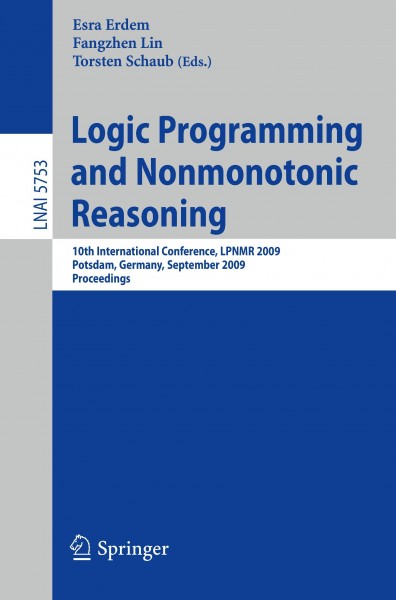 This volume contains the proceedings of the 10th International Conference on Logic Programming and Nonmonotonic Reasoning (LPNMR 2009), held during September 14-18, 2009 in Potsdam, Germany. LPNMR is a forum for exchanging ideas on declarative logic programming, nonmonotonic reasoning and knowledge representation. The aim of the c- ference is to facilitate interaction between researchers interested in the design and implementation of logic-based programming languages and database s- tems, and researchers who work in the areas of knowledge representation and nonmonotonic reasoning. LPNMR strives to encompass theoretical and expe- mental studies that have led or will lead to the construction of practical systems for declarative programming and knowledge representation. The special theme of LPNMR 2009 was "Applications of Logic Progr- ming and Nonmonotonic Reasoning" in general and "Answer Set Programming (ASP)" in particular. LPNMR 2009 aimed at providing a comprehensive survey of the state of the art of ASP/LPNMR applications. The special theme was re?ected by dedicating an entire dayof the conference to applications. Apart from special sessions devoted to original and signi?cant ASP/LPNMR applications, we solicited contributions providing an overview of existing successful applications of ASP/LPNMR systems. The presentations on applications were accompanied by two panels, one on existing and another on future applications of ASP/LPNMR. von Erdem, Esra und Lin, Fangzhen und Schaub, Torste