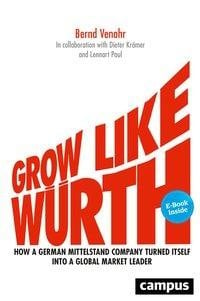 Grow like Würth
How a Tiny German Mittelstand Company Turned Itself into a Global Market Leader, plus E-Book inside (ePub, mobi oder pdf)

When Bernd Venohr and Dieter Krämer analyzed the operating system underlying German Mittelstand company Würth for the first time, Professor of Management Fredmund Malik called the book a »milestone«. Ever since thousands of readers wanted to understand how a tiny seller of screws from rural Künzelsau managed to become a world market leader in mounting and fastening technology long before the age of digital. Unlike others who were disrupted by digital competitors, Würth managed to defend the pole position within its industry by transforming its business model according to the requirements of a digital world. Lennart Paul, who during his time at Würth closely accompanied the digitalization process, explains how this daring feat was achieved.