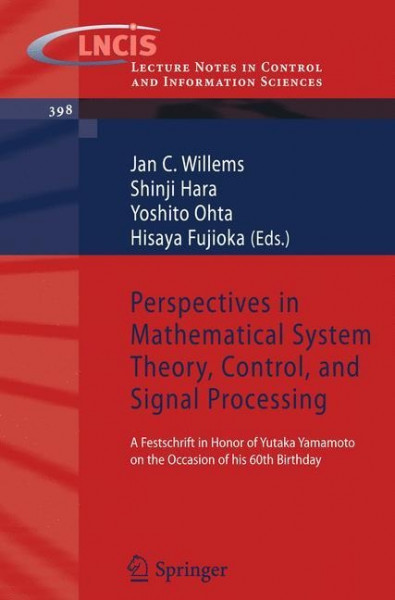 Perspectives in Mathematical System Theory, Control, and Signal Processing
A Festschrift in Honor of Yutaka Yamamoto on the Occasion of his 60th Birthday

This Festschrift, published on the occasion of the sixtieth birthday of Yutaka - mamoto ('YY' as he is occasionally casually referred to), contains a collection of articles by friends, colleagues, and former Ph.D. students of YY. They are a tribute to his friendship and his scienti?c vision and oeuvre, which has been a source of inspiration to the authors. Yutaka Yamamoto was born in Kyoto, Japan, on March 29, 1950. He studied applied mathematics and general engineering science at the Department of Applied Mathematics and Physics of Kyoto University, obtaining the B.S. and M.Sc. degrees in 1972 and 1974. His M.Sc. work was done under the supervision of Professor Yoshikazu Sawaragi. In 1974, he went to the Center for Mathematical System T- ory of the University of Florida in Gainesville. He obtained the M.Sc. and Ph.D. degrees, both in Mathematics, in 1976 and 1978, under the direction of Professor Rudolf Kalman. von Willems, Jan C. und Hara, Shinji und Ohta, Yoshito und Fujioka, Hisaya