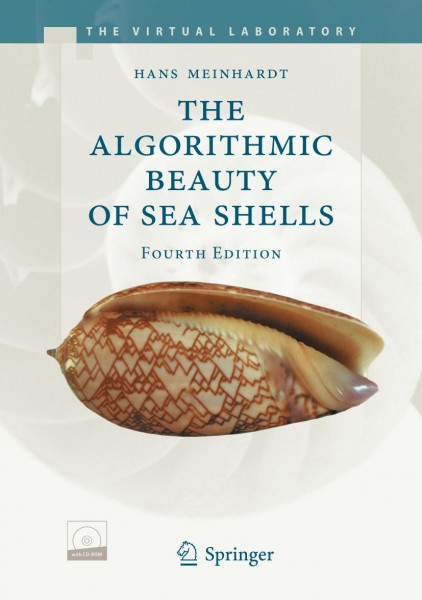 The Algorithmic Beauty of Sea Shells

The Algorithmic Beauty of Sea Shells
The Virtual Laboratory

The pigment patterns on tropical shells are of great beauty and diversity. Their mixture of regularity and irregularity is fascinating. A particular pattern seems to follow particular rules but these rules allow variations. No two shells are identical. The motionless patterns appear to be static, and, indeed, they consist of calci?ed material. However, as will be shown in this book, the underlying mechanism that generates this beauty is eminently dynamic. It has much in common with other dynamic systems that generate patterns, such as a wind-sand system that forms large dunes, or rain and erosion that form complex rami?ed river systems. On other shells the underlying mechanism has much in common with waves such as those commonly observed in the spread of an epidemic. A mollusk can only enlarge its shell at the shell margin. In most cases, only at this margin are new elements of the pigmentation pattern added. Therefore, the shell pattern preserves the record of a process that took place over time in a narrow zone at the growing edge. A certain point on the shell represents a certain moment in its history. Like a time machine one can go into the past or the future just by turning the shell back and forth. Having this complete historical record opens the possibility of decoding the generic principles behind this beauty. von Meinhardt, Hans und Prusinkiewicz, Przemyslaw und Fowler, Deborah R.