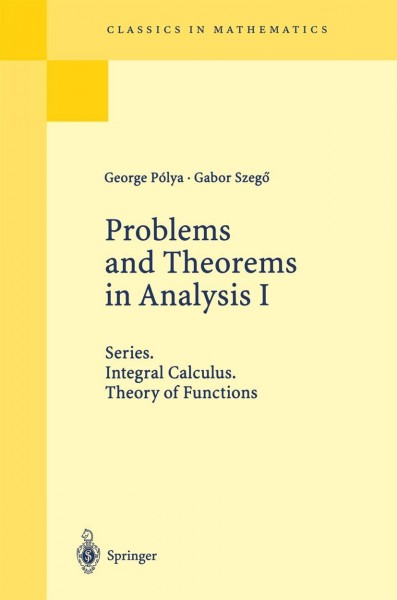 Problems and Theorems in Analysis I

Problems and Theorems in Analysis I
Series. Integral Calculus. Theory of Functions

From the reviews: "The work is one of the real classics of this century; it has had much influence on teaching, on research in several branches of hard analysis, particularly complex function theory, and it has been an essential indispensable source book for those seriously interested in mathematical problems." Bulletin of the American Mathematical Society von Polya, George

Biography of George PólyaBorn in Budapest, December 13, 1887, George Pólya initially studied law, then languages and literature in Budapest. He came to mathematics in order to understand philosophy, but the subject of his doctorate in 1912 was in probability theory and he promptly abandoned philosophy.After a year in Göttingen and a short stay in Paris, he received an appointment at the ETH in Zürich. His research was multi-faceted, ranging from series, probability, number theory and combinatorics to astronomy and voting systems. Some of his deepest work was on entire functions. He also worked in conformal mappings, potential theory, boundary value problems, and isoperimetric problems in mathematical physics, as well as heuristics late in his career. When Pólya left Europe in 1940, he first went to Brown University, then two years later to Stanford, where he remained until his death on September 7, 1985. Biography of Gabor SzegöBorn in Kunhegyes, Hungary, January 20, 1895, Szegö studied in Budapest and Vienna, where he received his Ph. D. in 1918, after serving in the Austro-Hungarian army in the First World War. He became a privatdozent at the University of Berlin and in 1926 succeeded Knopp at the University of KSnigsberg. It was during his time in Berlin that he and Pólya collaborated on their great joint work, the Problems and Theorems in Analysis. Szegö's own research concentrated on orthogonal polynomials and Toeplitz matrices. With the deteriorating situation in Germany at that time, he moved in 1934 to Washington University, St. Louis, where he remained until 1938, when he moved to Stanford. As department head at Stanford, he arranged for Pólya to join the Stanford faculty in 1942. Szegö remained at Stanford until his death on August 7, 1985.