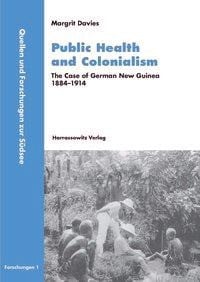 Up to now far too little has been known about the influence and the effect of European medicine in colonies and not much has been known as yet about the introduction and activity of medical doctors, and public health in general, in the colony of German New Guinea. The present study examines for the first time in detail the measures and goals of the German colonial administration in relation to issues of public health. The activities of medical practitioners, medical orderlies and nurses are examined, as are problems with endemic tropical and introduced diseases, the reaction of the native population to European health measures, the training of native men as "Heiltultuls" and the efficacy of their deployment, and the introduction of western standards of hygiene. Margrit Davies scrutinises the interplay of public health and colonialism and attempts an answer to the question of how the especifically German variety of "colonial medicine" is to be evaluated.