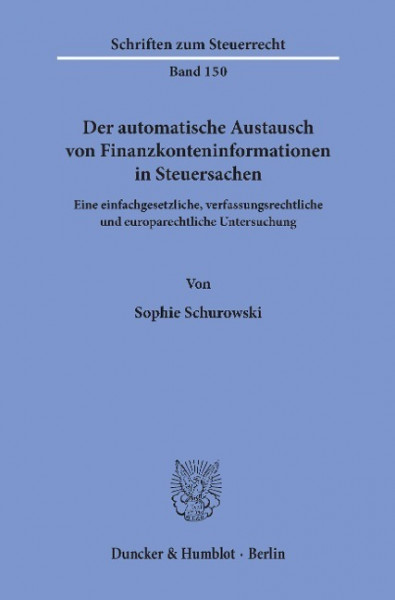 The Automatic Exchange of Financial Account information Between Tax Authorities The automatic exchange of financial account information between tax authorities is a result of the »Common Reporting Standard«, an OECD initiative which aimed at providing a verification tool in order to prevent cross border tax evasion. This thesis attempts to examine the »Common Reporting Standard« against the background of the German sub-constitutional national law, the German constitutional law as well as the European legal framework. It attempts to highlight the impact of the introduction of this standard on financial institutions that are now almost compelled to recruit for roles specifically to carry out official tax duties for account due diligence procedures - known as »Indienstnahme Privater«. This thesis will also attempt to analyze the impact on account holders as they are subject to encroachments upon fundamental rights due to the transmission of automatic data with countries within and outside the European Union. von Schurowski, Sophie