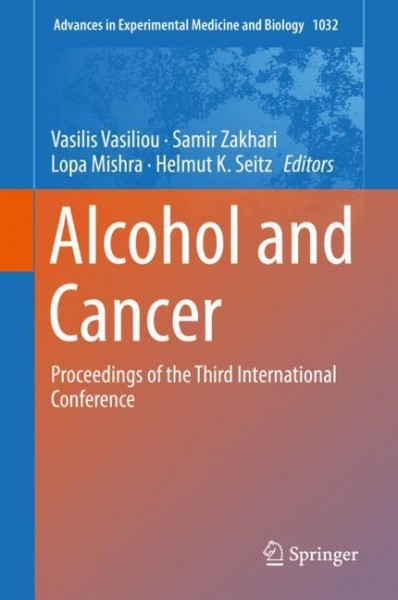 Alcohol and Cancer
Proceedings of the Third International Conference

Following the Third Alcohol and Cancer Conference, this volume compiles the most up-to-date research on the role of alcohol consumption in carcinogenesis, from epidemiology to pathology metabolism and stem cells. More specifically, it delves into the effects of alcohol consumption and thyroid cancer, CD133+ progenitor cells, carcinogenic iron accumulation, developmental morphogens, and cancer-inducing epigenetic changes. Alcohol and Cancer: Proceedings of the Third International Conference is a timely update to Biological Basis of Alcohol-Induced Cancer, which followed the Second Alcohol and Cancer Conference, compiling cutting-edge research from graduate students, young scientists, and researchers. It is ideal for graduate students and researchers in oncology, hepatology, epigenetics, and alcohol consumption. von Vasiliou, Vasilis

Vasilis Vasiliou is the Susan Dwight Bliss Professor of Epidemiology and Chair of the Department of Environmental Health Sciences at Yale School of Public Health. He received his BSc in Chemistry (1983) and PhD in Biochemical Pharmacology (1988) from the University of Ioannina, Greece. He then trained in gene-environment interactions, molecular toxicology and pharmacogenetics at the University of Cincinnati College of Medicine at the (1991-1995). In 1996, he joined the faculty of the University of Colorado School of Pharmacy where he rose through the ranks to become Professor and Director of the Toxicology Graduate Program. In July 2014, he joined the faculty of Yale University in his new position. His research interests include alcohol metabolism and toxicity, cellular responses to oxidative stress, gene-environment interactions, and pharmacogenetics. Samir Zakhari, is currently the Senior Vice President, Science, at the Distilled Spirits Council since he joined in October 2012. Previously, he spent 28 years at the National Institutes of Health, most recently as Director of Divisions of Basic Research, and Metabolism and Health Effects at the National Institute on Alcohol Abuse and Alcoholism. He obtained his Bachelor and Master degrees from Cairo University in Pharmacy and Pharmaceutical Chemistry, respectively. Subsequently, he obtained a Ph.D. in Pharmacology from the Czechoslovak Academy of Sciences, and then joined the Department of Pharmacology at the University of Pennsylvania, School of Medicine. He has over 40 years of research experience in the fields of pharmacology, toxicology, biochemistry, pharmaceutical chemistry, physiology, genetics, and molecular and cell biology. He authored and co-authored numerous articles about alcohol and cancer, and co-edited two books on the same subject published by Springer. Lopa Mishra, is currently Professor and Director, Center for Translational Medicine, Department of Surgery, George Washington University from 2015 where she moved from Houston Texas. Dr. Mishra was at MD Anderson from December 2009 until 2015, as Professor and Chair of Gastroenterology, Hepatology and Nutrition. After graduation from the University of London, she completed her residency at Mt. Sinai in New York and Fellowship at Johns Hopkins where she was a junior faculty member. Dr. Mishra's research is in TGF-ß signaling and the role of alcohol in cancer stem cells in liver and gastrointestinal cancer, with a focus on developing new prevention and treatment strategies. Helmut Karl Seitz is Distinguished Professor of Internal Medicine, Gastroenterology and Alcohol Research, Director of the Centre of Alcohol Research (CAR) at University of Heidelberg, and Clinical Director at Salem Medical Centre, Heidelberg, Germany. He received his MD Degree (1975) from the University of Heidelberg, was a Research Fellow at the Alcohol Research and Treatment Centre, Mount Sinai Medical Centre, New York (1977-1979) and joined the Human Nutrition Centre at Tufts University, Boston in1986 and1991. Since 1977 his interest is focused on basic and clinical research in alcohol metabolism and toxicity involved in alcoholic liver disease and alcohol mediated carcinogenesis.