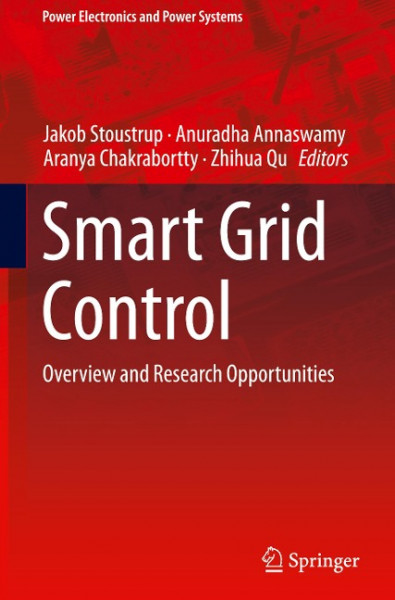 This book focuses on the role of systems and control. Focusing on the current and future development of smart grids in the generation and transmission of energy, it provides an overview of the smart grid control landscape, and the potential impact of the various investigations presented has for technical aspects of power generation and distribution as well as for human and economic concerns such as pricing, consumption and demand management. A tutorial exposition is provided in each chapter, describing the opportunities and challenges that lie ahead. Topics in these chapters include: wide-area control; issues of estimation and integration at the transmission; distribution, consumers, and demand management; and cyber-physical security for smart grid control systems. The contributors describe the problems involved with each topic, and what impact these problems would have if not solved. The tutorial components and the opportunities and challenges detailed make this book ideal for anyone interested in new paradigms for modernized, smart power grids, and anyone in a field where control is applied. More specifically, it is a valuable resource for students studying smart grid control, and for researchers and academics wishing to extend their knowledge of the topic. von Stoustrup, Jakob und Annaswamy, Anuradha und Chakrabortty, Aranya und Qu, Zhihua

Jakob Stoustrup received M.Sc. (EE, 1987) and Ph.D. (Applied Mathematics, 1991) degrees, both from the Technical University of Denmark. From 1991 to 1996, Stoustrup held several positions, including at the Department of Mathematics, Technical University of Denmark; Visiting Professor at the University of Strathclyde, Glasgow, U.K., and at the Mittag-Leffler Institute, Stockholm, Sweden. From 2006 to 2013, he was Head of Research for the Department of Electronic Systems, Aalborg University. From 2014 to 2016, Stoustrup was Chief Scientist at Pacific Northwest National Laboratory, USA, leading the Control of Complex Systems Initiative. From 1997 to 2013 and since 2016, Dr. Stoustrup has been a Professor at Automation & Control, Aalborg University, Denmark.Dr. Stoustrup has served as Associate Editor and editorial board member for several international journals; as General Chair, Program Chair, and IPC member for several international conferences; member of the IEEE CSS Board of Governors; and is Past Chairman of an IEEE CSS/RAS Joint Chapter and Chair of the IEEE CSS Technical Committee on Smart Grids. In 2013, he was appointed as the first IEEE CSS Wikipedia Editor. He served as the Chair for IFAC Technical Committee SAFEPROCESS, and was a member of the IFAC Technical Board. He received the Statoil Prize, the Dannin Award for Scientific Research and several conference paper awards. He also received the Chivalric Order of the Dannebrog for his research contributions. He is a member of the European Research Council, the Danish, Norwegian and Swedish Research Councils, and The Danish Academy of Technical Sciences, where he has acted as a board member.Anuradha Annaswamy received her Ph.D. in Electrical Engineering from Yale University in 1985. She has been a member of the faculty at Yale, Boston University, and MIT where she is currently the Director of the Active-Adaptive Control Laboratory and a Senior Research Scientist at the Department of Mechanical Engineering. Her research interests pertain to adaptive control theory and applications to aerospace, automotive, and propulsion systems; cyber-physical systems (CPS) science; and CPS applications to smart grids, smart cities, and smart infrastructures. She is the author of a hundred journal publications and numerous conference publications, co-author of a graduate textbook on adaptive control (2004), co-editor of two reports, IEEE Vision for Smart Grid Control: 2030 and Beyond, and Impact of Control Technology (ieeecss.org/main/IoCT-report, ieeecss.org/general/IoCT2-report).Dr. Annaswamy has received several awards including the George Axelby and Control Systems Magazine best paper awards from the IEEE Control Systems Society (CSS), the Presidential Young Investigator award from NSF, the Hans Fisher Senior Fellowship from the Institute for Advanced Study at the Technische Universität München, the Donald Groen Julius Prize from the Institute of Mechanical Engineers, a Distinguished Member Award, and a Distinguished Lecturer Award from IEEE CSS. Dr. Annaswamy is a fellow of the IEEE and IFAC and was the Vice President for Conference Activities (2014-15). She is currently serving as the VP for Technical Activities (2017-18) on the Executive Committee of the IEEE CSS.Aranya Chakrabortty received his BE degree in Electrical Engineering from Jadavpur University, India in 2004, and his MS and PhD degrees in Electrical Engineering from Rensselaer Polytechnic Institute, Troy, NY, in 2005 and 2008, respectively. Following that he was a Postdoctoral Research Associate at the University of Washington in Seattle for a year. From 2009 to 2010, he was an Assistant Professor at Texas Tech University. In 2010, Aranya joined the Electrical and Computer Engineering department of North Carolina State University, Raleigh, NC, where he is currently an Associate Professor. His research interests are in modeling and control of electric power systems, with a special focus on wide-area monitoring and control using synchrophasors, data-driven wide-area control, and their cyber-physical implementation using cloud-computing. He is a senior member of IEEE, and currently serves as an Associate Editor for IEEE Transactions on Control Systems Technology and an Editor for IEEE Transactions on Power Systems. He has previously co-edited a Springer book on optimization and control methods for smart grids in 2012. He received the NSF CAREER award in 2011.Dr. Zhihua Qu received his Ph.D. degree in Electrical Engineering at the Georgia Institute of Technology in June 1990. Since then, he has been with the University of Central Florida (UCF). He is Pegasus Professor and Chair of the Electrical and Computer Engineering Department, the PI and Director of DoE-funded FEEDER center, and the SAIC Endowed Professor at UCF. He is the author of 164 journal articles, 277 conference papers and several books, including Robust Control of Nonlinear Uncertain Systems by John Wiley & Sons (1998) and Cooperative Control of Dynamical Systems by Springer Verlag (2009). Dr. Qu serves on the board of ECEDHA, and is an Associate Editor for Automatica and IEEE ACCESS. Currently, he is also the Chair of IEEE CSS Technical Committee on Smart Grid. He is an IEEE Distinguished Lecturer and a fellow of IEEE and AAAS.