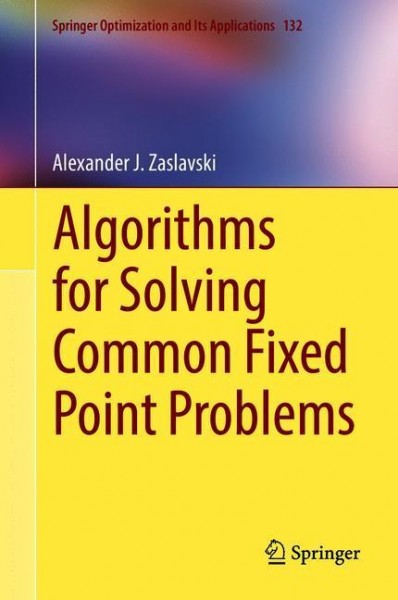 This book details approximate solutions to common fixed point problems and convex feasibility problems in the presence of perturbations. Convex feasibility problems search for a common point of a finite collection of subsets in a Hilbert space; common fixed point problems pursue a common fixed point of a finite collection of self-mappings in a Hilbert space. A variety of algorithms are considered in this book for solving both types of problems, the study of which has fueled a rapidly growing area of research. This monograph is timely and highlights the numerous applications to engineering, computed tomography, and radiation therapy planning. Totaling eight chapters, this book begins with an introduction to foundational material and moves on to examine iterative methods in metric spaces. The dynamic string-averaging methods for common fixed point problems in normed space are analyzed in Chapter 3. Dynamic string methods, for common fixed point problems in a metric space are introduced and discussed in Chapter 4. Chapter 5 is devoted to the convergence of an abstract version of the algorithm which has been called component-averaged row projections (CARP). Chapter 6 studies a proximal algorithm for finding a common zero of a family of maximal monotone operators. Chapter 7 extends the results of Chapter 6 for a dynamic string-averaging version of the proximal algorithm. In Chapters 8 subgradient projections algorithms for convex feasibility problems are examined for infinite dimensional Hilbert spaces. von Zaslavski, Alexander J.