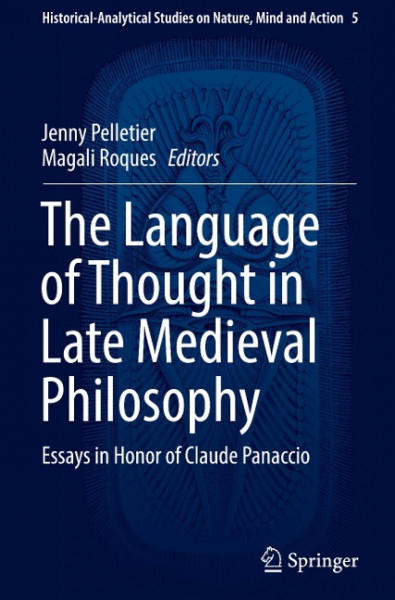 The Language of Thought in Late Medieval Philosophy

This edited volume presents new lines of research dealing with the language of thought and its philosophical implications in the time of Ockham. It features more than 20 essays that also serve as a tribute to the ground-breaking work of a leading expert in late medieval philosophy: Claude Panaccio. Coverage addresses topics in the philosophy of mind and cognition (externalism, mental causation, resemblance, habits, sensory awareness, the psychology, illusion, representationalism), concepts (universal, transcendental, identity, syncategorematic), logic and language (definitions, syllogisms, modality, supposition, obligationes, etc.), action theory (belief, will, action), and more. A distinctive feature of this work is that it brings together contributions in both French and English, the two major research languages today on the main theme in question. It unites the most renowned specialists in the field as well as many of Claude Panaccio's former students who have engaged with his work over the years. In furthering this dialogue, the essays render key topics in fourteenth-century thought accessible to the contemporary philosophical community without being anachronistic or insensitive to the particularities of the medieval context. As a result, this book will appeal to a general population of philosophers and historians of philosophy with an interest in logic, philosophy of language, philosophy of mind, and metaphysics. von Pelletier, Jenny und Roques, Magali

Jenny Pelletier currently holds a postdoctoral fellowship from Research Foundation - Flanders (FWO) at the University of Leuven in medieval philosophy. She received her PhD in December 2010 in Leuven and has held research fellowships in Montreal and Belgium. Her research interests include late medieval philosophy with a particular emphasis on Ockham and his contemporaries in the areas of metaphysics, philosophical theology, and political theory and the related areas of logic and language.Magali Roques currently holds a postdoctoral fellowship from Deutsche Forschungsgemeinschaft (DFG) at the University of Hamburg and is an associate researcher at the Laboratoire d'Etudes sur les Monothéismes. She received her PhD in December 2012 from Université François-Rabelais de Tours, and held several postdoctoral positions in Canada, Switzerland, and Germany. Her research interests focus on fourteenth-century philosophy, especially Ockham and his contemporaries. Her work deals with connections between philosophy of language and metaphysics.