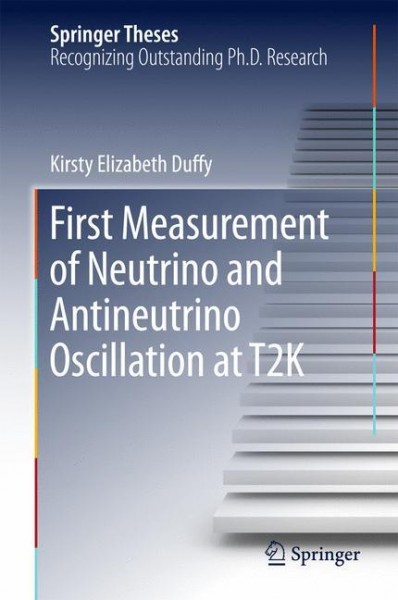 First Measurement of Neutrino and Antineutrino Oscillation at T2K

First Measurement of Neutrino and Antineutrino Oscillation at T2K

This thesis reports the measurement of muon neutrino and antineutrino disappearance and electron neutrino and antineutrino appearance in a muon neutrino and antineutrino beam using the T2K experiment. It describes a result in neutrino physics that is a pioneering indication of charge-parity (CP) violation in neutrino oscillation; the first to be obtained from a single experiment. Neutrinos are some of the most abundant-but elusive-particles in the universe, and may provide a promising place to look for a potential solution to the puzzle of matter/antimatter imbalance in the observable universe. It has been firmly established that neutrinos can change flavour (or 'oscillate'), as recognised by the 2015 Nobel Prize. The theory of neutrino oscillation allows for neutrinos and antineutrinos to oscillate differently (CP violation), and may provide insights into why our universe is matter-dominated. Bayesian statistical methods, including the Markov Chain Monte Carlo fitting technique, are used to simultaneously optimise several hundred systematic parameters describing detector, beam, and neutrino interaction uncertainties as well as the six oscillation parameters. von Duffy, Kirsty Elizabeth

Kirsty Duffy is a postdoctoral researcher in particle physics at the University of Oxford. Her research focuses on neutrino oscillation at the T2K experiment. Kirsty completed both her undergraduate degree and DPhil at the University of Oxford. During her DPhil, Kirsty was awarded the Winton Capital Prize for Statistical Analysis of Data, as well as sharing the 2016 Breakthrough prize in fundamental physics with collaborators from T2K and other neutrino experiments. She has been working as a postdoctoral researcher at the University of Oxford since October 2016, and has been awarded a Lederman Fellowship at the Fermi National Accelerator Laboratory, to begin in August 2017.