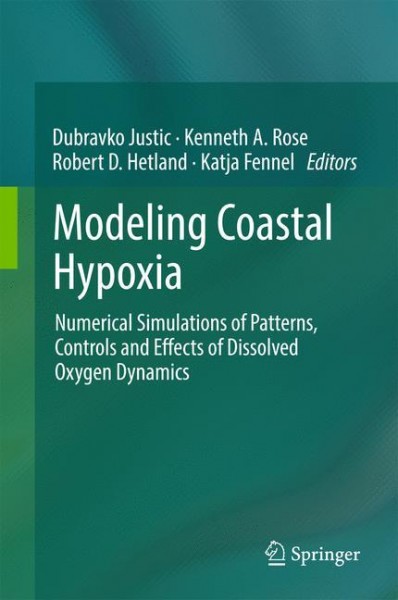 This book provides a snapshot of representative modeling analyses of coastal hypoxia and its effects. Hypoxia refers to conditions in the water column where dissolved oxygen falls below levels that can support most metazoan marine life (i.e., 2 mg O2 l-1). The number of hypoxic zones has been increasing at an exponential rate since the 1960s; there are currently more than 600 documented hypoxic zones in the estuarine and coastal waters worldwide. Hypoxia develops as a synergistic product of many physical and biological factors that affect the balance of dissolved oxygen in seawater, including temperature, solar radiation, wind, freshwater discharge, nutrient supply, and the production and decay of organic matter. A number of modeling approaches have been increasingly used in hypoxia research, along with the more traditional observational and experimental studies. Modeling is necessary because of rapidly changing coastal circulation and stratification patterns that affect hypoxia, the large spatial extent over which hypoxia develops, and limitations on our capabilities to directly measure hypoxia over large spatial and temporal scales. This book consists of 15 chapters that are broadly organized around three main topics: (1) Modeling of the physical controls on hypoxia, (2) Modeling of biogeochemical controls and feedbacks, and, (3) Modeling of the ecological effects of hypoxia. The final chapter is a synthesis chapter that draws generalities from the earlier chapters, highlights strengths and weaknesses of the current state-of-the-art modeling, and offers recommendations on future directions. von Justic, Dubravko und Rose, Kenneth A. und Hetland, Robert D. und Fennel, Katja

Dr. Dubravko Justic is Texaco Distinguished Professor in the Department of Oceanography and Coastal Sciences at Louisiana State University (LSU). Previously, he was Eric L. Abraham Distinguished Professor in Louisiana Environmental Studies and Director of LSU's Coastal Ecology Institute. His research interests include ecosystem modeling, coastal eutrophication, hypoxia, and potential impacts of climate change on coastal ecosystems. He has studied extensively low oxygen zones in the northern Adriatic Sea and northern Gulf of Mexico and has employed various types of numerical simulation models to describe controls of environmental factors on hypoxia and predict the consequences of management actions. He is presently working on characterizing connectivity among wetland, estuarine and shelf ecosystems in the northern Gulf of Mexico and evaluating tradeoffs associated with different Mississippi River management alternatives. Dr. Kenneth Rose is Professor in the Department of Oceanography and Coastal Sciences, and Associate Dean for Research in the College of the Coast and Environment, at Louisiana State University. He will soon be joining the faculty at Horn Point Laboratory, part of the University of Maryland Center for Environmental Science, as the Franz Merrick Professor in Sustainable Ecosystem Restoration. Dr. Rose's research centers on using mathematical and computer simulation modeling to predict and better understand fish population and food web dynamics in estuaries, lakes, reservoirs, and oceans. He was recently awarded the Award of Excellence (for lifetime achievement) from the American Fisheries Society. He has been a member of multiple steering and advisory committees providing scientific guidance and oversight, including several National Academy of Sciences' committees. Dr. Rose has published over 150 papers on topics related to ecological and fisheries modeling and analysis, and has served on multiple editorial boards. He is presently working on the scaling of hypoxia effects from individual fish to the population level. Dr. Robert Hetland is a Professor in the Department of Oceanography, Texas A&M University. His research focuses on understanding and predicting circulation in buoyancy driven flows in estuaries and the coastal ocean. Dr. Hetland's primary research tool is the Regional Ocean Modeling System (ROMS) which he uses to perform numerical simulations of coastal and estuarine circulation, with applications that include oil spill trajectory prediction, harmful algal bloom formation, and coastal hypoxia. Dr. Hetland's simulations of circulation over the Texas-Louisiana shelf have provided new insights into the mechanisms that cause seasonal hypoxia in that region. Dr. Hetland is an Editor for the Journal of Geophysical Research. Dr. Katja Fennel is Professor in the Department of Oceanography at Dalhousie University. As head of the Marine Environmental Modeling Group (http://memg.ocean.dal.ca), she leads the development of marine ecosystem and biogeochemical models at Dalhousie. For over two decades, Dr. Fennel has developed and applied numerical models of marine ecosystems and biogeochemistry with particular focus on continental shelf systems and the cycling of nitrogen, carbon and oxygen. In addition to implementing biogeochemical models, Dr. Fennel has developed and applied methods for the assimilation of observations into these models in order to improve their predictive capabilities. She serves as co-editor-in-chief of the high-impact journal Biogeosciences, and has served on the editorial boards of three other scientific journals and on several international science advisory bodies including the IMBER/LOICZ Continental Margins Task Team and the CLIVAR Working Group on Ocean Model Development. Currently she is science team member of GODAE OceanView, co-chairs the GODAE Marine Ecosystem Analysis and Prediction Task Team, and serves on the science advisory boards of the Copernicus Marine Environment Monitoring Service in Europe, the Ocean Frontier Institute at Dalhousie, and the international Biogeochemical Argo steering committee.