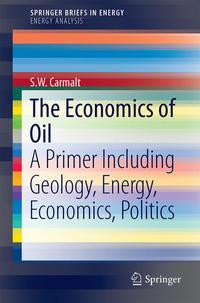 The Economics of Oil

The Economics of Oil
A Primer Including Geology, Energy, Economics, Politics

This book examines the ways that oil economics will impact the rapidly changing global economy, and the oil industry itself, over the coming decades. The predictions of peak oil were both right and wrong. Oil production has been constrained in relation to demand for the past decade, with a resulting four-fold increase in the oil price slowing the entire global economy. High oil prices have encouraged a small increase in oil production, and mostly from the short-lived "fracking revolution," but enough to be able to claim that "peak oil" was a false prophecy. The high oil price has also engendered massive exploration investments, but remaining hydrocarbon stocks generally offer poor returns in energy (the energy return on investment or EROI) and financial terms, and no longer replace the reserves being produced. As a result, the economically powerful oil companies are under great pressure, both financially and politically, as oil remains the backbone of the global economy.Development scenarios and political pressure for growth as a means of solving economic woes both require more net energy, which is the amount of energy available after energy (and thus financial) inputs required for new sources to come on line are deducted. In today's economy, more energy usually means more oil. Although a barrel of oil from any source may look the same, "tight oil" and oil from tar sands require much higher prices to be profitable for the producer; these expensive sources have very different economic implications from the conventional oil supplies that underpinned economic growth for most of the 20th century. The role of oil in the global economy is not easily changed. Since currently installed infrastructure assumes oil, a change implies more than just substitution of an energy source. The speed with which such basic structural changes can be made is also constrained, and ultimately themselves dependent on fossil fuel inputs. It remains unclear how this scenario will evolve, and that uncertainty adds additional economic pressure to the investment decisions that must be made. "Drill baby drill" and new pipeline projects may be attractive politically, but projections of economic and associated oil production growth based on past performance are clearly untenable. von Carmalt, S. W.

Fresh from his university training as a geologist, Sam Carmalt joined a major oil company at the height of the gasoline shortages of the 1970s. His goal was to help find more of the oil that society needs. But he discovered that his employer's interest was somewhat different -- to make a good financial return. Since then, as an employee, with a major industry consultancy, and as an independent consultant Sam has investigated the interface between energy and the economy. As these relationships undergo significant changes, he provides important insights into how the oil needed for our economy is found and paid for.