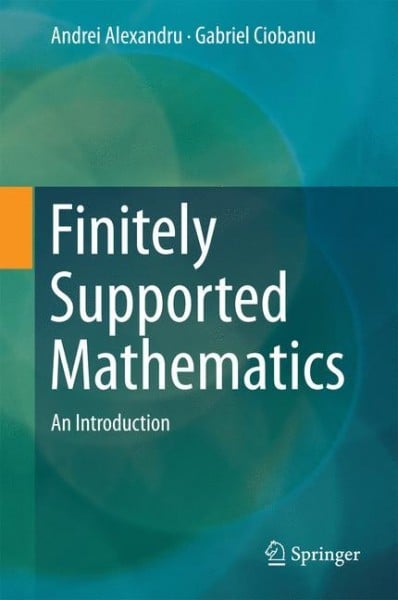 In this book the authors present an alternative set theory dealing with a more relaxed notion of infiniteness, called finitely supported mathematics (FSM). It has strong connections to the Fraenkel-Mostowski (FM) permutative model of Zermelo-Fraenkel (ZF) set theory with atoms and to the theory of (generalized) nominal sets. More exactly, FSM is ZF mathematics rephrased in terms of finitely supported structures, where the set of atoms is infinite (not necessarily countable as for nominal sets). In FSM, 'sets' are replaced either by `invariant sets' (sets endowed with some group actions satisfying a finite support requirement) or by `finitely supported sets' (finitely supported elements in the powerset of an invariant set). It is a theory of `invariant algebraic structures' in which infinite algebraic structures are characterized by using their finite supports. After explaining the motivation for using invariant sets in the experimental sciences as well as the connections with the nominal approach, admissible sets and Gandy machines (Chapter 1), the authors present in Chapter 2 the basics of invariant sets and show that the principles of constructing FSM have historical roots both in the definition of Tarski `logical notions' and in the Erlangen Program of Klein for the classification of various geometries according to invariants under suitable groups of transformations. Furthermore, the consistency of various choice principles is analyzed in FSM. Chapter 3 examines whether it is possible to obtain valid results by replacing the notion of infinite sets with the notion of invariant sets in the classical ZF results. The authors present techniques for reformulating ZF properties of algebraic structures in FSM. In Chapter 4 they generalize FM set theory by providing a new set of axioms inspired by the theory of amorphous sets, and so defining the extended Fraenkel-Mostowski (EFM) set theory. In Chapter 5 they define FSM semantics for certain process calculi (e.g., fusion calculus), and emphasize the links to the nominal techniques used in computer science. They demonstrate a complete equivalence between the new FSM semantics (defined by using binding operators instead of side conditions for presenting the transition rules) and the known semantics of these process calculi.The book is useful for researchers and graduate students in computer science and mathematics, particularly those engaged with logic and set theory. von Alexandru, Andrei und Ciobanu, Gabriel