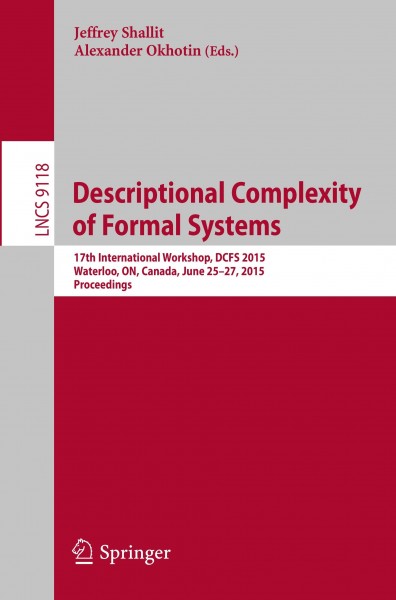 This book constitutes the refereed proceedings of the 17th International Conference on Descriptional Complexity of Formal Systems, DCFS 2015, held in Waterloo, ON, Canada, in June 2015. The 23 full papers presented together with 2 invited talks were carefully reviewed and selected from 29 submissions. The subject of the workshop was descriptional complexity. Roughly speaking, this field is concerned with the size of objects in various mathematical models of computation, such as finite automata, pushdown automata, and Turing machines. Descriptional complexity serves as a theoretical representation of physical realizations, such as the engineering complexity of computer software and hardware. It also models similar complexity phenomena in other areas of computer science, including unconventional computing and bioinformatics. von Shallit, Jeffrey und Okhotin, Alexander