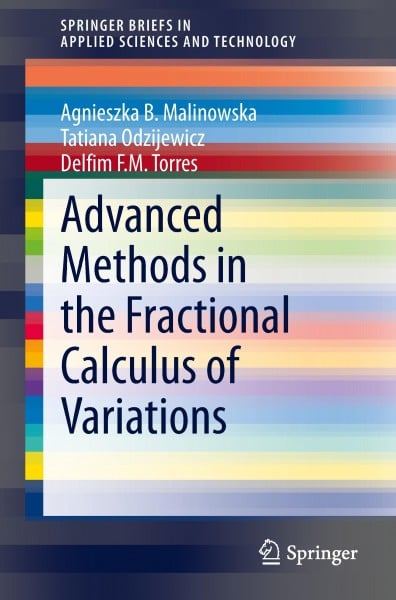 Advanced Methods in the Fractional Calculus of Variations

Advanced Methods in the Fractional Calculus of Variations

This brief presents a general unifying perspective on the fractional calculus. It brings together results of several recent approaches in generalizing the least action principle and the Euler-Lagrange equations to include fractional derivatives.The dependence of Lagrangians on generalized fractional operators as well as on classical derivatives is considered along with still more general problems in which integer-order integrals are replaced by fractional integrals. General theorems are obtained for several types of variational problems for which recent results developed in the literature can be obtained as special cases. In particular, the authors offer necessary optimality conditions of Euler-Lagrange type for the fundamental and isoperimetric problems, transversality conditions, and Noether symmetry theorems. The existence of solutions is demonstrated under Tonelli type conditions. The results are used to prove the existence of eigenvalues and corresponding orthogonal eigenfunctions of fractional Sturm-Liouville problems.Advanced Methods in the Fractional Calculus of Variations is a self-contained text which will be useful for graduate students wishing to learn about fractional-order systems. The detailed explanations will interest researchers with backgrounds in applied mathematics, control and optimization as well as in certain areas of physics and engineering. von Malinowska, Agnieszka B. und Odzijewicz, Tatiana und Torres, Delfim F. M.