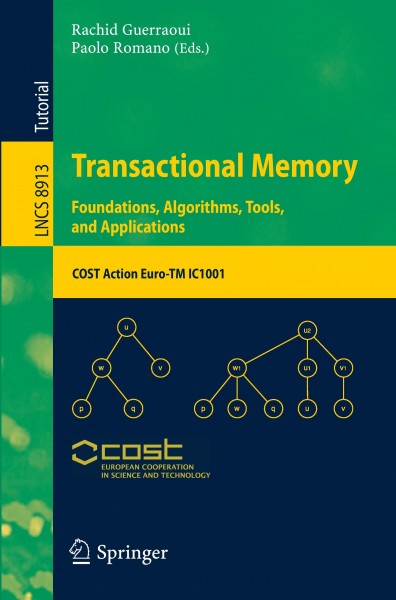 The advent of multi-core architectures and cloud-computing has brought parallel programming into the mainstream of software development. Unfortunately, writing scalable parallel programs using traditional lock-based synchronization primitives is well known to be a hard, time consuming and error-prone task, mastered by only a minority of specialized programmers. Building on the familiar abstraction of atomic transactions, Transactional Memory (TM) promises to free programmers from the complexity of conventional synchronization schemes, simplifying the development and verification of concurrent programs, enhancing code reliability, and boosting productivity. Over the last decade TM has been subject to intense research on a broad range of aspects including hardware and operating systems support, language integration, as well as algorithms and theoretical foundations. On the industrial side, the major players of the software and hardware markets have been up-front in the research and development of prototypal products providing support for TM systems. This has recently led to the introduction of hardware TM implementations on mainstream commercial microprocessors and to the integration of TM support for the world's leading open source compiler. In such a vast inter-disciplinary domain, the Euro-TM COST Action (IC1001) has served as a catalyzer and a bridge for the various research communities looking at disparate, yet subtly interconnected, aspects of TM. This book emerged from the idea having Euro-TM experts compile recent results in the TM area in a single and consistent volume. Contributions have been carefully selected and revised to provide a broad coverage of several fundamental issues associated with the design and implementation of TM systems, including their theoretical underpinnings and algorithmic foundations, programming language integration and verification tools, hardware supports, distributed TM systems, self-tuning mechanisms, as well as lessons learnt from building complex TM-based applications. von Guerraoui, Rachid und Romano, Paolo