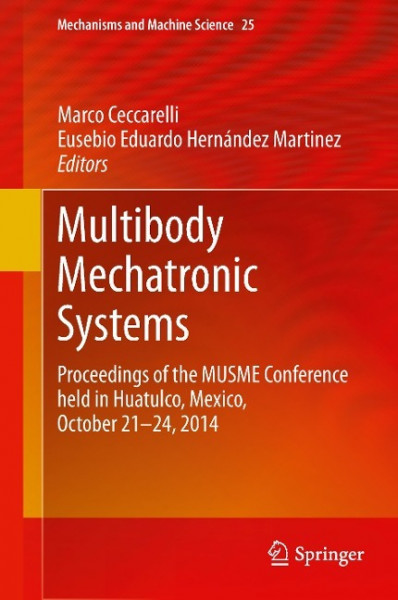 This volume contains the Proceedings of MUSME 2014, held at Huatulco in Oaxaca, Mexico, October 2014. Topics include analysis and synthesis of mechanisms; dynamics of multibody systems; design algorithms for mechatronic systems; simulation procedures and results; prototypes and their performance; robots and micromachines; experimental validations; theory of mechatronic simulation; mechatronic systems; and control of mechatronic systems.The MUSME symposium on Multibody Systems and Mechatronics was held under the auspices of IFToMM, the International Federation for Promotion of Mechanism and Machine Science, and FeIbIM, the Iberoamerican Federation of Mechanical Engineering. Since the first symposium in 2002, MUSME events have been characterised by the way they stimulate the integration between the various mechatronics and multibody systems dynamics disciplines, present a forum for facilitating contacts among researchers and students mainly in South American countries, and serve as a joint conference for the IFToMM and FeIbIM communities. von Ceccarelli, Marco und Hernández Martinez, Eusebio Eduardo