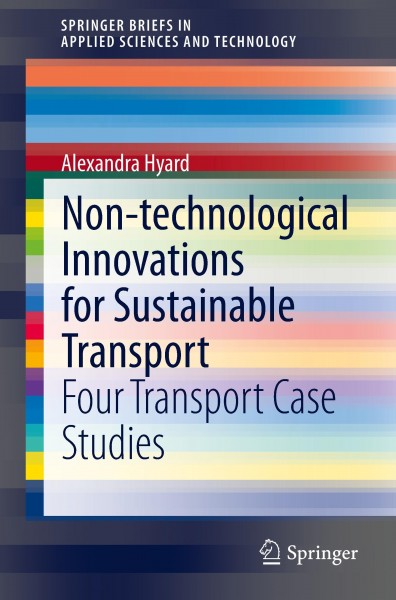 Examining non-technological innovations for environmentally and socially-friendly transport, this book provides the reader with a better understanding of this often overlooked topic. It features four illustrative case studies, and presents a concise review of the core transport modes (road, rail and marine transport). Transport companies are compelled to innovate due to economic and environmental pressures, and the aim of these innovations is to improve fuel efficiency and ultimately to transform energy use in the transport sector. Whilst many of these innovations are technological, they can conversely be non-technological in nature. This book is intended for students and researchers interested in economics, environmental economics and economics of innovation. It also offers a useful resource to industry professionals interested in ecology and transport. von Hyard, Alexandra

Corinne Blanquart is a director of research at IFSTTAR (French Institute of Science and Technology for Transport, Development and Networks). She is heading the research unit SPLOTT (productive systems, logistics, transport organisation and work). She received a PhD and a professorial thesis (Habilitation à Diriger les Recherches) in economics from Lille University. Her areas of research are freight transport, sustainable logistics and assessment of transport policies. She teaches courses in transport policies, rail transport and analysis of freight demand. She is responsible of the module « actors and institutions » in the Post-Master professional certificate « rail and transport systems ». She is involved in several national and European research projects dealing with topics such as assessment of the role of public-private innovation networks, interconnexion between short and long distance for freight transport, sustainable logistics, logistic performance... Laetitia Dablanc is a Director of Research at the French Institute of Science and Technology for Transport, Development and Networks (IFSTTAR, University of Paris-Est), and a member of METROFREIGHT, a VREF Center of excellence in urban freight research. Her areas of research are freight transportation, freight and the environment, urban freight and logistics, rail freight, freight transport policies. She is currently working on logistics sprawl issues and freight transport planning in U.S. and European megaregions. She is a member of the steering committee of the World Conference on Transport Research Society and a member of the Urban Freight Committee of the Transportation Research Board (USA). She received a PhD in transportation planning from Ecole des Ponts-ParisTech, and a Master's degree in city and regional planning from Cornell University. She was initially trained in policy analysis and economics at Science Po Paris. She was a visiting scholar at the Georgia Institute of Technology (2010-2011) and the University of Southern California/METRANS (2011-2012).Marianne Fischman is nowadays a teacher in economics and was a contractual researcher at the Sorbonne Economics Center (CES) (France) of the CNRS during this research. She received a Master Degree in sustainable development from the University of Paris I Panthéon-Sorbonne and a PhD in Economics from the University of Lille I (France). Marianne Fischman has extensive experience on agents conflicting interests and their social effects. She was involved in a national research project in the field of urban planning and barge transport.Hakim Hammadou is associate professor of economics in the research centre EQUIPPE, University of Lille. I'm also research associate at the Climate Economics Chair, within the Research Initiative 'Mobility in a low carbon society' since 2013. During the last 10 years, he work on transport economy and housing economy. His research interests include travel demand modeling, policy evaluation of the effect of transportation control and the problem to evaluate the value of travel time. He is part of the task force for a project to build a dynamic mono-regional CGE model for the French capital region. His methodological research interests are in the areas of econometric and mathematical modeling of consumer behavior.Alexandra Hyard is Associate Professor in Economics at the University Lille 1 (France). She has been researcher at the French Institute of Science and Technology for Transport, Spatial Planning, Development and Networks (IFSTTAR). She hold a PhD in Economics from the Ecole des Hautes Etudes en Sciences Sociales (EHESS, France). Her main research interests are the economics and policy of innovation in services and the economics of transport. She has published in these areas on international peer-reviewed journals (Transportation Research: Part A, Technological Forecasting and Social Changes...). She has produced commissioned reports for the French Ministry of Transport (DURLOG), for the CNRS ("Services durables"). She has also been involved in the European Research Project intitled "ServPPin, The Contribution of Public and Private Services to European Growth and Welfare, and the Role of Public-Private Innovation Networks", within EU FP7.Emeric Lendjel is associate Professor at the University Paris I Panthéon-Sorbonne (France) where he received his PhD in Economics. After a post-doctoral stay at the University of Lausanne (Switzerland), he integrated the French Comité National Routier (CNR). Since 2002, he is director of the Master degree in International Transport of the University Paris I Pantheon-Sorbonne. During the first semester of 2011, he was a guest researcher of the World Maritime University in Malmö (Sweden). He was involved in a national research project in the field of urban planning and barge transport.  Eleonora Morganti is post doc at the French Institute of Science and Technology for Transport, Development and Networks, IFSTTAR in Paris. Her areas of research are urban freight systems and city logistics policies, focusing on e-commerce logistics, last food miles and food hubs. In 2011, she received her Ph.D. on Policies for Sustainable Development at the University of Bologna, Italy. In 2011 Eleonora was a visiting scholar at the University of Santa Cruz, California, where she worked on urban food planning and urban freight provisioning systems. After completing her graduate studies, she collaborated with SAGE research center in Berkeley, California and with the logistics platform of Saint Charles International, Perpignan, France.  Thomas Zeroual is an economist and a research professor working in an international Business School in Paris. He teaches supply chain management and sustainable development in multiple institutions such are: Institute of Political Sciences (IEP) and USTL (French University). From 2005 to 2008, he worked at the French Transport Institute (IFSTTAR). Dr. Zeroual's main research areas are service, innovation and sustainability measurement in the retail sector. Dr. Zeroual most up-to-date interest is on sustainable transport policy and its impacts on three particular areas: local, national and European.