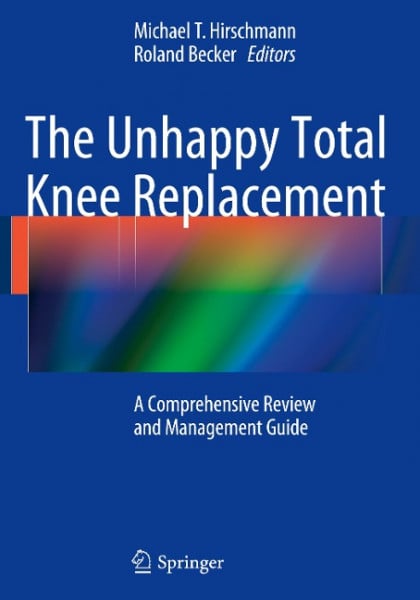 This book addresses the need for improved diagnostic and treatment guidelines for patients in whom total knee arthroplasty (TKA) has had an unsatisfactory outcome. It opens by discussing the basics of TKA and the various causes of failure and pain. Diagnostic aspects are considered in detail, with attention to advances in clinical investigation, laboratory analysis and in particular, imaging techniques. In addition, helpful state of the art diagnostic algorithms are presented. Specific pathology-related treatment options, including conservative approaches and salvage and revision TKA strategies, are then explained, with identification of pitfalls and key points. A series of illustrative cases cover clinical scenarios frequently encountered in daily clinical practice. The evidence-based, clinically focused guidance provided in this book, written by internationally renowned experts, will assist surgeons in achieving the most effective management of these challenging cases. von Hirschmann, Michael und Becker, Rola

Michael T. Hirschmann, MD, is head of Knee Surgery at Kantonsspital Baselland (Bruderholz, Liestal, Laufen). He trained at the University of Mainz in Germany, graduating in 2004. He then worked from 2004-2006 as registrar at the Departement of Surgery at University of Basel. His orthopaedic residency was spent at Bruderholz Hospital and Kantonsspital Baselland under the leadership of Professor Dr. Niklaus Friederich. He became a board certified specialist in Orthopaedic Surgery in 2011. He completed a 12 months clinical and research fellowship at the Imperial College London, UK under Prof. Justin Cobb and Prof. Andrew Amis. In addition, he spent a 3 months knee fellowship in Melbourne, Australia with John Bartlett. Michael went on several fellowships such as the ESSKA-APOSSM Travelling Fellowship 2012, the AGA European Arthroscopy Fellowship 2011 and the EFORT Visiting Fellowship 2010, which he spent with Dr. Timo Järvelä in Tampere, Finland. For his research he was awarded numerous awards such as the Swiss Quality Award 2013, the ESSKA Basic Science Poster Award 2012, 2nd AGA Poster Award 2013 and the EANM Young Investigator Award 2013. His research focus has been on diagnostics and treatment of knee injuries involving the cartilage, meniscus or ligaments, diagnostics and treatment of patients with OA and in particular on unhappy patients after knee arthroplasty surgery. Another major research focus lies on the evaluation and development of 3D imaging such as CT, MRI and SPECT/CT on orthopaedic purposes. He published numerous original articles and book chapters in these areas. Michael has been a member of ESSKA since 2007 and has been active in the ESSKA arthroscopy and cartilage committee. He is also a member of AAOS, ACL Study Group, AGA, DGOOC, DKG,EKA, EORS, GOTS and ISAKOS. In September 2012, he was appointed an Ass. Professor (PD) at the University of Basel, Switzerland. Roland Becker is Head of the Centre for Orthopedics and Trauma Surgery, Klinikum Brandenburg (Municipal Hospital Brandenburg), Brandenburg, Germany. Dr. Becker graduated in medicine from the Medical Academy, Magdeburg, in 1992 and received his board certification in Orthopedics in 1998 and in Orthopedics and Trauma Surgery in 2006. He received his Habilitation and "venia legendi" for Orthopedics and Sports Traumatology in 2003 and was appointed Associate Professor at Otto von Guericke University, Magdeburg in 2011. Dr. Becker has held various leading positions in medical scientific societies, including as President of the Gesellschaft für Arthroskopie und Gelenkchirurgie (Society for Arthroscopy and Joint Surgery), a member of the Board of Directors of European Knee Associates (of ESSKA) and a member of the Knee Committee of the International Society of Arthroscopy, Knee Surgery and Orthopedic Sports Medicine (ISAKOS). Dr. Becker has published 68 articles in peer-reviewed journals and ten book chapters.