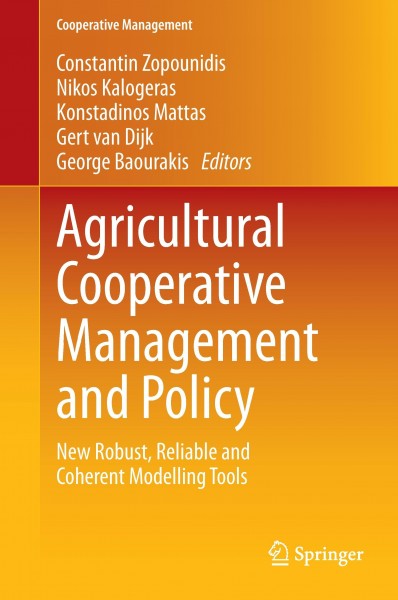 This book focuses on the use of farm level, micro- and macro-data of cooperative systems and networks in developing new robust, reliable and coherent modeling tools for agricultural and environmental policy analysis. The efficacy of public intervention on agriculture is largely determined by the existence of reliable information on the effects of policy options and market developments on farmers' production decisions and in particular, on key issues such as levels of agricultural and non-agricultural output, land use and incomes, use of natural resources, sustainable-centric management, structural change and the viability of family farms. Over the last years, several methods and analytical tools have been developed for policy analysis using various sets of data. Such methods have been based on integrated approaches in an effort to investigate the above key issues and have thus attempted to offer a powerful environment for decision making, particularly in an era of radical change for both agriculture and the wider economy. von Zopounidis, Constantin und Kalogeras, Nikos und Mattas, Konstadinos und Dijk, Gert und Baourakis, George

Constantin Zopounidis is Professor of Financial Engineering and Operations Research at the Technical University of Crete (Greece), Distinguished Research Professor at Audencia Nantes, School of Management (France), Senior Academician of the Royal Academy of Economics and Financial Sciences of Spain, and President of the Financial Engineering and Banking Society (FEBS). He has edited and authored 70 books with international publishers and more than 400 research papers in scientific journals, edited volumes, conference proceedings and encyclopedias, in the areas of finance, accounting, operations research and management science. In recognition of his research work, he has received several awards from international research societies such as the International Society on Multiple Criteria Decision Making, the Decision Sciences Institute, the MOISIL International Foundation, ESCP Europe and the Hellenic Operational Research Society.Nikos Kalogeras works as an Assistant Professor of Marketing-Finance and Co-director of the Marketing-Finance Research Lab (MDRL) and MSc IB- Marketing-Finance at the Dept. of Marketing & Supply Chain Management/UM. He is also a research associate of the European Center of Corporate Engagement (ECCE), at the Dept. of Finance/UM, and the Service Science Factory (SSF)/SBE/UM. Nikos studied Economics (BSc), Economics & Management Sciences (MA), Marketing & Consumer Behavior (MSc), Financial Engineering & Management (M.Eng), Strategic Marketing-Finance (PhD) and Risk Management (Post-Doc).Konstadinos Mattas is a Professor of Agricultural Policy. His education includes a B.Sc. in Agriculture from Aristotle University of Thessaloniki (1972), a B.Sc. in Economics from University of Macedonia (1976), a M.Sc. in Agricultural Economics from University of Kentucky (1982) and a Ph.D. in Agricultural Economics from University of Kentucky (1984). He has published in more than 100 international refereed journals, in collective volumes and proceedings. He has contributed to international and Greek conferences and served as a referee to several international journals.Gert van Dijk is Professor of Cooperative Business Administration and Management at Nyenrode Business Universiteit and became Director General of the National Council of Cooperatives in 1990. He is Director of the Netherlands Institute of Cooperative Entrepreneurship. Studied Animal Husbandry and Genetics at the Agricultural University of Wageningen and Economics at the University of Aberdeen, Scotland, where he also earned his PhD. He was (senior) lecturer at both these universities for a number of years. Subsequently he was Director of Multidisciplinary Research Studies at the Organization for Applied Physical Research (TNO) and later became Director of Studies for Agricultural Policy Research at Wageningen University.George Baourakis is the Director of the Mediterranean Agronomic Institute of Chania, CIHEAM-MAICh since June 2012, and the Studies and Research Coordinator of the Business Economics and Management Department of MAICh since 1989.He has co-ordinated and participated in a large number of EU (FP 4th, 5th, 6th and 7th, INTERREG I, II and III-Archimed, MED, ENPI CBC MED, Tempus, Phare, Life, Lifelong Learning, Leonardo Da Vinci, European Social Fund, etc), international and national-regional research projects. He is an Affiliate Professor in Marketing and Supply Chain Management, at the Centre of Entrepreneurship, Nyenrode University, The Netherlands Business School, while he has been appointed as Distinguished Research Fellow in Food Marketing-Management at several universities. He has published numerous papers in internationally refereed scientific journals, presented extensively at international conferences and authored/co-authored several scientific and academic books and special issues which have been distributed by renowned publishing houses.