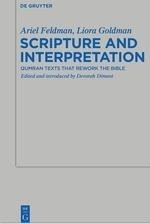 Scripture and Interpretation
Qumran Texts that Rework the Bible

The discovery of the Dead Sea Scrolls more than sixty years ago has revealed a wealth of literary compositions which rework the Hebrew Bible in various ways. This genre seems to have been a popular literary form in ancient Judaism literature. However, the Qumran texts of this type are particularly interesting for they offer for the first time a large sample of such compositions in their original languages, Hebrew and Aramaic. Since the rewritten Bible texts do not use the particular style and nomenclature specific to the literature produced by the Qumran community. Many of these texts are unknown from any other sources, and have been published only during the last two decades. They therefore became the object of intense scholarly study. However, most the attention has been directed to the longer specimens, such as the Hebrew Book of Jubilees and the Aramaic Genesis Apocryphon. The present volume addresses the less known and poorly studied pieces, a group of eleven small Hebrew texts that rework the Hebrew Bible. It provides fresh editions, translations and detailed commentaries for each one. The volume thus places these texts within the larger context of the Qumran library, aiming at completing the data about the rewritten Bible. von Feldman, Ariel und Goldman, Liora und Dimant, Devorah