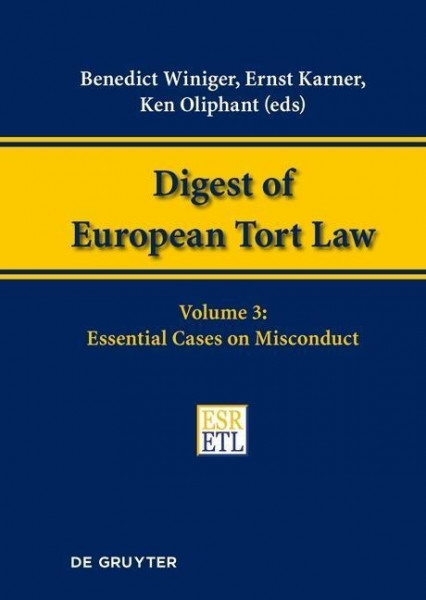 The various national European legal systems offer a broad range of responses to the question of what can be regarded as wrongful behaviour or fault. The present work systematically examines these two important prerequisites for tortious liability under the combined heading of 'misconduct'. Unlike current textbooks, national casebooks and monographs, it builds on the experiences gathered in the national legal systems over the past decades and thereby fills a major gap which still exists today. It thus does what the previous volumes in the 'Digest of European Tort Law' series did for other key elements of tort law, namely natural causation and damage. Once again, the publication contains a selection of the most important cases from 28 states across Europe as well as cases handed down by European Union courts; it also highlights cases from earlier periods of legal history. For each case, the facts and the relevant court decision are presented and these are then accompanied by an analytical commentary. In addition, the editors provide comparative analyses of the cases reported and a special report is dedicated to how key decisions would be resolved under model European rules on tort law. The editors believe that the material gathered here may provide guidance for an organic convergence of the national legal systems in Europe. It constitutes the basis of an acquis commun that is infinitely richer (though also much more complex) than the rather bland and abstract concepts contained in national codifications, European legislation and modern model rules. von Winiger, Benedict und Karner, Ernst und Oliphant, Ke