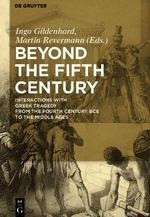 Beyond the Fifth Century

Beyond the Fifth Century brings together 13 scholars from various disciplines (Classics, Ancient History, Mediaeval Studies) to explore interactions with Greek tragedy from the 4th century BCE up to the Middle Ages. The volume breaks new ground in several ways. Its chronological scope encompasses periods that are not usually part of research on tragedy reception, especially the Hellenistic period, late antiquity and the Middle Ages. The volume also considers not just performance reception but various other modes of reception, between different literary genres and media (inscriptions, vase paintings, recording technology). There is a pervasive interest in interactions between tragedy and society-at-large, such as festival culture and entertainment (both public and private), education, religious practice, even life-style. Finally, the volume features studies of a comparative nature which focus less on genealogical connections (although such may be present) but rather on the study of equivalences. von Gildenhard, Ingo und Revermann, Marti