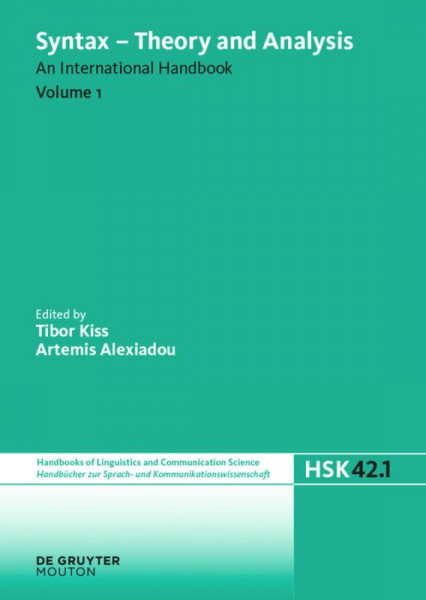 This Handbook represents the development of research and the current level of knowledge in the fields of syntactic theory and syntax analysis. Syntax can look back to a long tradition. Especially in the last 50 years, however, the interaction between syntactic theory and syntactic analysis has led to a rapid increase in analyses and theoretical suggestions. This second edition of the Handbook on Syntax adopts a unifying perspective and therefore does not place the division of syntactic theory into several schools to the fore, but the increase in knowledge resulting from the fruitful argumentations between syntactic analysis and syntactic theory. It uses selected phenomena of individual languages and their cross-linguistic realizations to explain what syntactic analyses can do and at the same time to show in what respects syntactic theories differ from each other. It investigates how syntax is related to neighbouring disciplines and investigate the role of the interfaces especially the relationship between syntax and phonology, morphology, compositional semantics, pragmatics, and the lexicon. The phenomena chosen bring together renowned experts in syntax, and represent the consensus reached as to what has to be considered as an important as well as illustrative syntactic phenomenon. The phenomena discuss do not only serve to show syntactic analyses, but also to compare theoretical approaches with each other. von Kiss, Tibor und Alexiadou, Artemis