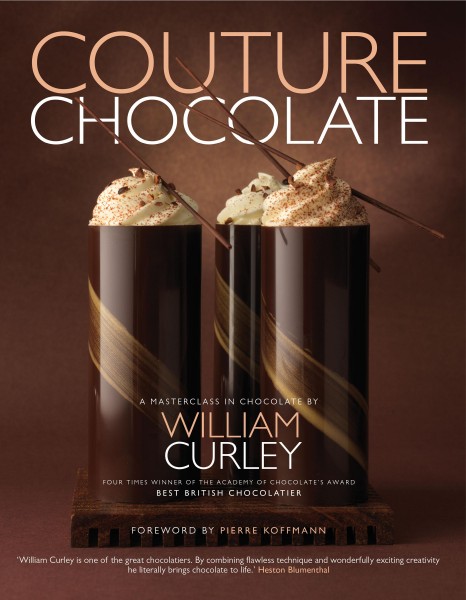 Couture Chocolate
A Masterclass in Chocolate

At one time, cocoa beans were prized so highly they were used as currency and only the privileged could enjoy what the Aztecs knew as 'xocoatl'. Nowadays, high-quality chocolate is widely available in many different delicious forms to an increasingly discerning market. In this delightfully decadent book, the UK's premier chocolatier William Curley presents the ultimate master class for all things chocolate. Couture Chocolate first examines the origins of one of the world's most popular foods -explaining the method of creating chocolate, how its quality depends to a large extent on the variety of bean used, and the differences between plain, milk and white chocolates. It reveals how some of today's most popular flavours -such as vanilla and chilli- were those favoured by the pioneering Aztec chocolatiers centuries ago. In the chocolate master class, William shares his techniques and most mouth-watering recipes, starting with the basics: tempering and making a bar of chocolate; advice on how to add exotic flavours like rosemary or raspberry; and introducing different textures. Once those skills have been mastered, it's time to tackle some of his incredible creations... His delectable recipes are helpfully grouped into sections: 'Truffles and Filled Chocolates' examines the science behind creating the perfect truffle, making ganache and adding fabulous flavours; 'Couture Chocolates' looks at experimental (but delicious) fillings such as apricot and wasabi, sea salt caramel, black rice vinegar and thyme; 'Bouches and Small Delights' covers blackcurrant tea cake, chocolate rochers and millionaire shortbread; 'Patisserie' explores chocolate and praline Paris Brest, chocolate financier with passion fruit curd, chocolate mille-fuille and more; 'Cakes and Biscuits' boasts chocolate and pistachio cake, macaroons, sable and chocolate rosette with orange ganache; and finally 'Chocolate Ices, Drinks, Sauces and Spread' looks at a huge variety, including Gianduja chocolate, Tahitian vanilla and golden chestnut. With its unique recipes and sumptuous photographs, Couture Chocolate delivers a lifetime's worth of culinary excitement and experimentation into your kitchen. With William Curley as a guide, you need never eat a bland dessert again. von Curley, William