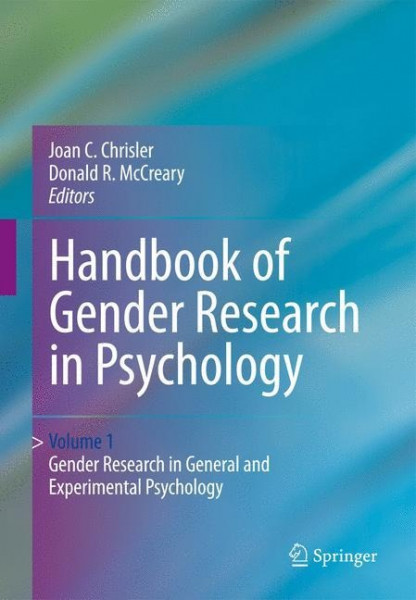 Handbook of Gender Research in Psychology

Donald R. McCreary and Joan C. Chrisler The Development of Gender Studies in Psychology Studies of sex differences are as old as the ?eld of psychology, and they have been conducted in every sub?eld of the discipline. There are probably many reasons for the popularity of these studies, but three reasons seem to be most prominent. First, social psychological studies of person perception show that sex is especially salient in social groups. It is the ?rst thing people notice about others, and it is one of the things we remember best (Fiske, Haslam, & Fiske, 1991; Stangor, Lynch, Duan, & Glass, 1992). For example, people may not remember who uttered a witty remark, but they are likely to remember whether the quip came from a woman or a man. Second, many people hold ?rm beliefs that aspects of physiology suit men and women for particular social roles. Men's greater upper body strength makes them better candidates for manual labor, and their greater height gives the impression that they would make good leaders (i. e. , people we look up to). Women's reproductive capacity and the caretaking tasks (e. g. , breastfeeding, baby minding) that accompany it make them seem suitable for other roles that require gentleness and nurturance. Third, the logic that underlies hypothesis testing in the sciences is focused on difference. Researchers design their studies with the hope that they can reject the null hypothesis that experimental groups do not differ. von McCreary, Donald R. und Chrisler, Joan C.

Joan C. Chrisler is Class of 1943 Professor of Psychology at Connecticut College. She has published extensively on gender roles, attitudes toward menstruation and menopause, women's health and embodiment, and other topics. She has edited seven previous books, most recently Lectures on the Psychology of Women (4th ed., 2008, McGraw-Hill) and Women over 50: Psychological Perspectives (2007, Springer). She has served as Editor of Sex Roles and on the Editorial Boards of Psychology of Women Quarterly, Sex Roles, and Teaching of Psychology. Dr. Chrisler is a Fellow of the Association for Psychological Science and the American Psychological Association (Divisions 1, 2, 9, 35, 38, 46, 52). Donald R. McCreary is an Adjunct Professor of Psychology at Brock University and York University.  He has published extensively on gender roles, the psychology of men, and other topics.  He has co-edited one previous book, Applied Social Psychology (1997, Prentice Hall).  He has served as Associate Editor of Psychology of Men and Masculinity and of the International Journal of Men's Health, and is a member of the Editorial Boards of Sex Roles, Journal of Men's Studies, and Body Image. Dr. McCreary is a Fellow of the American Psychological Association (Division 51).