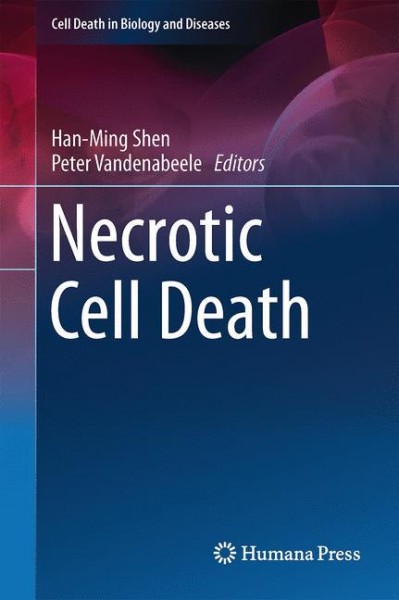 Starting with discussion of basic concepts and the molecular mechanisms of necrosis, this book looks first at several forms of necrotic cell death that have been identified, including necroptosis, autophagic cell death, and PARP-mediated cell death. As necrotic cell death is increasingly known to play a critical role in many physiological processes, the next chapters discuss its effect on metabolism, inflammation, immunity, and development. Necrotic cell death is closely implicated in human diseases like cancer, so the next chapters examine its relevance to human diseases, and final chapters cover methodologies for measuring necrosis. This book presents comprehensive coverage of necrosis from recognized experts from leading academic and medical institutions around the world. ¿In contrast to apoptosis, well-defined as a form of programmed cell death, necrosis used to be considered as accidental (i.e., non-programmed) cell death, usually in response to a severe injury. Accumulating evidence now suggests, however, that necrosis is also programmed and controlled by distinctive "death machinery" in response to various stimuli like oxidative stress or DNA damage. von Vandenabeele, Peter und Shen, Han-Ming

Dr. Han-Ming Shen is currently Associate Professor in the Department of Physiology, Yong Loo Lin School of Medicine, National University of Singapore. He received his Ph.D. from the National University of Singapore and holds a Master of Medicine from Zhejiang Medical University, China. Winner of several academic and scientific awards, Dr. Shen's main research interests include autophagy in cell death and cancer, involvement of reactive oxygen/nitrogen species and oxidative stress in cell death signaling pathways (apoptotic and non-apoptotic cell death), and antioxidants and natural products as anti-cancer agents.Dr. Peter Vandenabeele obtained his PhD in Biology in the lab of Prof. Walter Fiers at Ghent University in Belgium. Currently, he is a Primary Investigator at the Flanders Institute for Biotechnology (VIB) and a Senior Professor at Ghent University where he also served for ten years as Director of the Bachelor's and Master's program in Biochemistry and Biotechnology and still serves on the Board of Governors.  His research focuses on molecular mechanisms of cell death and inflammation with focus on necrotic cell death which is studied in an integrated way at biochemical, cell biological and experimental disease level. Dr. Vandenabeele has also twice been chairman of the Euroconference on Apoptosis, organized by the European Cell Death Organization (ECDO).