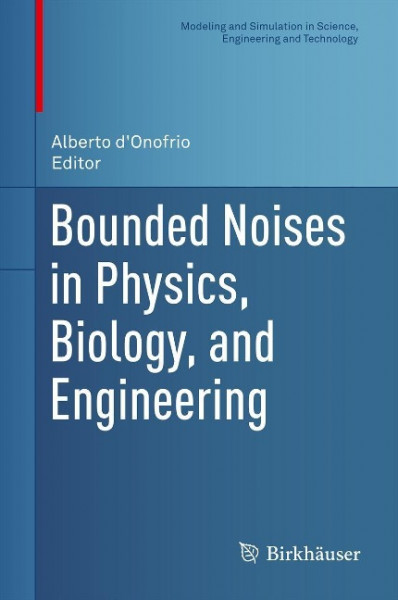 ¿¿Since the parameters in dynamical systems of biological interest are inherently positive and bounded, bounded noises are a natural way to model the realistic stochastic fluctuations of a biological system that are caused by its interaction with the external world. Bounded Noises in Physics, Biology, and Engineering is the first contributed volume devoted to the modeling of bounded noises in theoretical and applied statistical mechanics, quantitative biology, and mathematical physics. It gives an overview of the current state-of-the-art and is intended to stimulate further research. The volume is organized in four parts. The first part presents the main kinds of bounded noises and their applications in theoretical physics. The theory of bounded stochastic processes is intimately linked to its applications to mathematical and statistical physics, and it would be difficult and unnatural to separate the theory from its physical applications. The second is devoted to framing bounded noises in the theory of random dynamical systems and random bifurcations, while the third is devoted to applications of bounded stochastic processes in biology, one of the major areas of potential applications of this subject. The final part concerns the application of bounded stochastic processes in mechanical and structural engineering, the area where the renewed interest for non-Gaussian bounded noises started. Pure mathematicians working on stochastic calculus will find here a rich source of problems that are challenging from the point of view of contemporary nonlinear analysis. Bounded Noises in Physics, Biology, and Engineering is intended for scientists working on stochastic processes with an interest in both fundamental issues and applications. It will appeal to a broad range of applied mathematicians, mathematical biologists, physicists, engineers, and researchers in other fields interested in complexity theory. It is accessible to anyone with a working knowledge of stochastic modeling, from advanced undergraduates to senior researchers. von D'Onofrio, Alberto