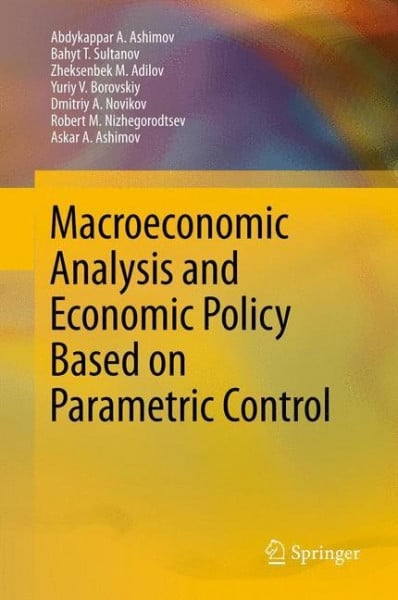 Macroeconomic Analysis and Economic Policy Based on Parametric Control

Macroeconomic Analysis and Economic Policy Based on Parametric Control

After the transition to free economy, governments of the former Soviet republics realized that in spite of becoming a part of the shaky international economic order, their individual economic success can be assured by rational national economic policies that in addition to the fundamental law of supply and demand govern the economic mechanism sensitive to both external and internal phenomena.¿ Originally published in Russian and now translated in English, this book by Dr. A. Ashimov and his colleagues offers a novel theory providing a numerically-justifiable approach to the solution of major economy control problems that are faced by virtually every government in the world. First, they developed and validated numerous mathematical models describing complex interactions between economic and social factors thus enabling the decision makers to foresee the outcomes of their decisions. Second, on the basis of these models the authors formulated the appropriate control problems that could be interpreted as achieving the transition to the desirable economic regimes and maintaining these regimes in spite of initial conditions and both external and internal perturbations. It should be noted that due to the inherent uncertainty introduced by the use of statistical models, the nonlinearity of the underlying phenomena and the intention to obtain the optimal solutions, the solution process becomes quite intricate and calls for the application of the most sophisticated techniques offered in advanced control theory. The authors utilized the most instrumental statistical model validation techniques; they established sufficient conditions for the existence of optimal solutions of the relevant control problems; and¿they skillfully combined the applications of the phase space formalism, system stability analysis, and the methods of functional analysis. Finally, they developed algorithms resulting in the optimal problem solutions, thus offering economic policy makers a dependable decision support tool. Macroeconomic Analysis and Economic Policy Based on Parametric Control offers a novel, highly mathematical approach to the solution of very realistic economy control problems. It presents a good example of the application of mathematical modeling, advanced control theory, and model-based decision making that could be adopted by researchers and graduate students specializing in economics, control, and relevant areas of research, addressing their own research problems.¿¿ von Ashimov, Abdykappar Ashimovich und Sultanov, Bahyt Turlykhanovich und Adilov, Zheksenbek Makeevich und Borovskiy, Yuriy Vyacheslavovich und Novikov, Dmitriy Alexandrovich und Nizhegorodtsev, Robert Mikhailovich