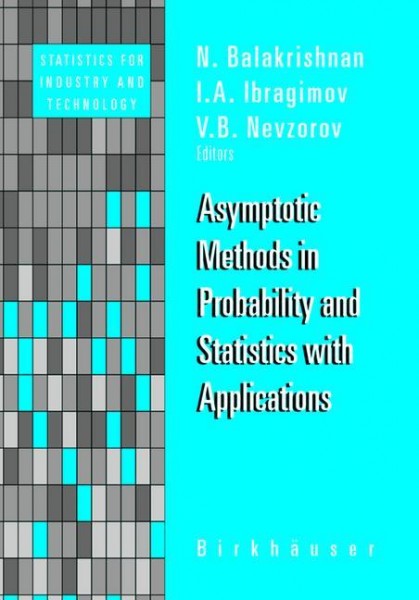 Asymptotic Methods in Probability and Statistics with Applications

Asymptotic Methods in Probability and Statistics with Applications

Traditions of the 150-year-old St. Petersburg School of Probability and Statis­ tics had been developed by many prominent scientists including P. L. Cheby­ chev, A. M. Lyapunov, A. A. Markov, S. N. Bernstein, and Yu. V. Linnik. In 1948, the Chair of Probability and Statistics was established at the Department of Mathematics and Mechanics of the St. Petersburg State University with Yu. V. Linik being its founder and also the first Chair. Nowadays, alumni of this Chair are spread around Russia, Lithuania, France, Germany, Sweden, China, the United States, and Canada. The fiftieth anniversary of this Chair was celebrated by an International Conference, which was held in St. Petersburg from June 24-28, 1998. More than 125 probabilists and statisticians from 18 countries (Azerbaijan, Canada, Finland, France, Germany, Hungary, Israel, Italy, Lithuania, The Netherlands, Norway, Poland, Russia, Taiwan, Turkey, Ukraine, Uzbekistan, and the United States) participated in this International Conference in order to discuss the current state and perspectives of Probability and Mathematical Statistics. The conference was organized jointly by St. Petersburg State University, St. Petersburg branch of Mathematical Institute, and the Euler Institute, and was partially sponsored by the Russian Foundation of Basic Researches. The main theme of the Conference was chosen in the tradition of the St. von Balakrishnan, N. und Ibragimov, I. A. V. B. und Nevzorov, V. B.