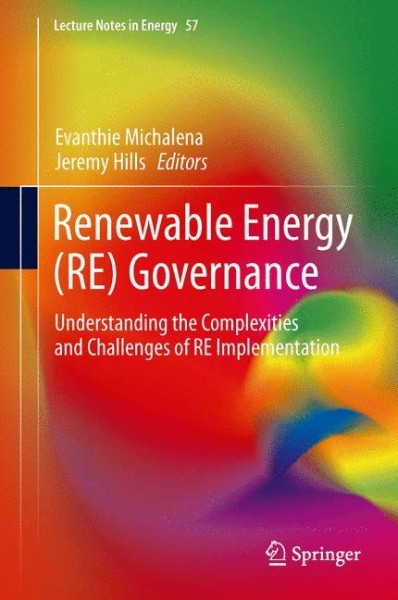 This book focuses on Renewable Energy (RE) governance - the institutions, plans, policies and stakeholders that are involved in RE implementation - and the complexities and challenges associated with this much discussed energy area. Whilst RE technologies have advanced and become cheaper, governance schemes rarely support those technologies in an efficient and cost-effective way. To illustrate the problem, global case-studies delicately demonstrate successes and failures of renewable energy governance. RE here is considered from a number of perspectives: as a regional geopolitical agent, as a tool to meet national RE targets and as a promoter of local development. The book considers daring insights on RE transitions, governmental policies as well as financial tools, such as Feed-in-Tariffs; along with their inefficiencies and costs. This comprehensive probing of RE concludes with a treatment of what we call the "Mega-What" question - who is benefitting the most from RE and how society can get the best deal?After reading this book, the reader will have been in contact with all aspects of RE governance and be closer to the pulse of RE mechanisms. The reader should also be able to contribute more critically to the dialogue about RE rather than just reinforce the well-worn adage that "RE is a good thing to happen". von Michalena, Evanthie und Hills, Jeremy

Dr. Evanthie Michalena is a PhD holder from the Sorbonne University of Paris (PhD research on Renewable Energy policy in islands), a Master in Decision Sciences from the Economic University of Athens, a Master on Energy Economics from the Economic University of Piraeus and a Bachelor on Economics from the University of Piraeus, Greece. Her professional career counts 17 years in the energy sector, holding posts first in the Power Public Corporation (the electricity State-Owned Utility of Greece), and then in the Energy Regulator of Greece (RAE). In RAE, she is a Special Advisor in the Dpt of the Monitoring of Hellenic Energy Market. As a scientific Researcher, she is attached at the laboratory ENEC of the Sorbonne University and CRNS and has participated at numerous research projects in Greece, Europe, Asia, Africa, Mauritius and elsewhere. Up to now, she has a record of 12 publications in peer-reviewed journals, and 36 presentations in conferences at an international level. In parallel, she collaborates with the European Commission, as an evaluator of European projects and trainer. As an evaluator, she collaborates with DG-RELEX/EuropeAid (Energy Facility projects for Asia, Africa, Pacific), DG-Environment and DG-TREN (such as LIFE2006, LIFE+, FP6). Dr Jeremy Hills is a Director of CTL Consult Ltd. He is a Chartered Environmentalist with over 18 years' experience of research and consultancy in the environment, specialising in coastal and marine zones. He was worked on a suite of interdisciplinary environmental projects on wetland, coastal and marine resources, integrated coastal zone management (ICZM), environmental assessment, strategic planning, project design and evaluation, capacity building and institutional strengthening. Dr Hills has worked in over 30 countries in Asia, Africa, Caribbean, Europe, South America and the Middle East. He has worked for a range of clients including international institutions such as the EC (e.g. AID, AsiaLink, EDF, FP6, FP7, INTERREG, LIFE+, TACIS), Intergovernmental Oceanographic Commission (UNESCO), UNDP, World Bank, aid organisations such as CIDA, DFID and SIDA and a range of other non-governmental (NGO) and commercial organisations. He has developed national coastal strategies, management / action plans, climate change mitigation and adaptation strategies, developed future scenarios for coastal areas and undertaken a range of stakeholder engagement and capacity building initiatives. He has managed projects including the development of prototype Coastal Habitat Management Plans in the UK, environmental policy in Turkmenistan and coastal livelihoods in Thailand and Tanzania.