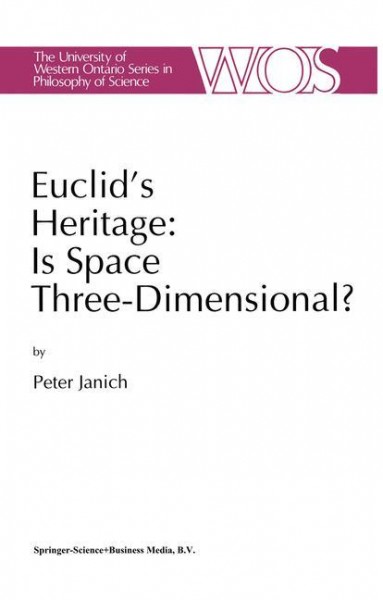 We live in a space, we get about in it. We also quantify it, we think of it as having dimensions. Ever since Euclid's ancient geometry, we have thought of bodies occupying parts of this space (including our own bodies), the space of our practical orientations (our 'moving­ abouts'), as having three dimensions. Bodies have volume specified by measures of length, breadth and height. But how do we know that the space we live in has just these three dimensions? It is theoreti­ cally possible that some spaces might exist that are not correctly described by Euclidean geometry. After all, there are the non­ Euclidian geometries, descriptions of spaces not conforming to the axioms and theorems of Euclid's geometry. As one might expect, there is a history of philosophers' attempts to 'prove' that space is three-dimensional. The present volume surveys these attempts from Aristotle, through Leibniz and Kant, to more recent philosophy. As you will learn, the historical theories are rife with terminology, with language, already tainted by the as­ sumed, but by no means obvious, clarity of terms like 'dimension', 'line', 'point' and others. Prior to that language there are actions, ways of getting around in the world, building things, being interested in things, in the more specific case of dimensionality, cutting things. It is to these actions that we must eventually appeal if we are to understand how science is grounded.