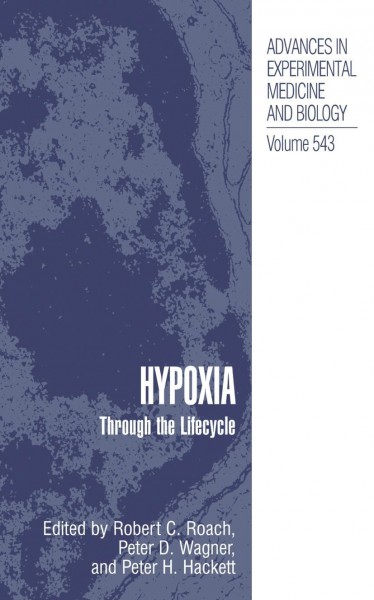 Hypoxia
Through the Lifecycle

The International Hypoxia Symposium convenes biannually to bring together international experts from many fields to explore the state of the art in normal and pathophysiological responses to hypoxia. Representatives from five continents and 32 countries joined together in February 2003 for four days in the dramatic mountains of Banff, Alberta. As editors of the Proceedings of the International Hypoxia Symposia, we strive to maintain a 26 six year tradition of presenting a stimulating blend of clinical and basic science papers focused on hypoxia. Topics covered in 2003 include hibernation and hypoxia, hypoxia and fetal development and new advances in high altitude pathophysiology, oxidative stress and membrane damage, hypoxic regulation of blood flow, heat shock proteins in hypoxia, and future directions in hypoxia research. In 2003 we also had the privilege ofhonoring John W. Severinghaus as a friend, colleague, mentor and inspiration to many in the field. Tom Hornbein's personal tribute to John Severinghaus is the first chapter in this volume, followed by an entertaining update of the history of the discovery of oxygen written by John Severinghaus.